There’s been a few times while in the produce section at the grocery store pondering over the limited ground provision section, when I’ve been questioned about some of the selections. People are very interested in learning more about the “strange” foods which now occupy space on the shelves… name, where it comes from, how do you prepare it, taste, texture and how to shop for them. Grocers should post a little info card with items that’s not necessarily common to everyday shoppers.

Before you send me “clarification” emails I have to mention that what I used (as it was labelled) is “taro” and not dasheen. Pretty much the same thing if you ask me, but I just wanted to be clear (I’ve being getting buff lately). We were down at the St Lawrence Market this past Saturday and after sampling some of the freshly made oven roasted pork belly which also had that rich smokey taste of bacon and the sort of crispy skin that crackles with fatty goodness… we just had to get some to take home with us. My dad grew up on my great grandparents cocoa and coffee plantation and being there was no electricity or fridge.. a lot of their meats were smoked, salted or brine. As soon as my dad saw the thick slices of the bacon, he spoke about his childhood days and eating this with ground provisions. Yup! The lights went off in my head as I knew I had a taro in my fridge from my grocery trip a couple days back.

The bacon I used was  pork belly which was smoked as would bacon, then oven roasted with some sort of glaze. The crispy skin and bit’s of fat will work well with this dish. If pork is not your thing or you’d like to keep this vegetarian, you can omit any meat in the refrying step. Another option instead of the bacon would be pieces of slated cod fish or any sort of smoked meats you like.

The first part of the recipe is basically how to peel, cut and cook taro or dasheen. After which you can mix it with some butter and have it very  basic. Or you can certainly refry with bacon or smoke meats as I will show you later and also make it vegetarian by not using any sort of meat. Additionally you can mash as you would potatoes and make a creamy mashed dasheen by adding milk/cream, butter and some fresh ground black pepper. (to peel use a sharp pairing knife or potato peeler)

Peel, cut into pieces (same size for uniform cooking time) and wash under cool water. If you’re using freshly harvested taro or dasheen you may want to wear gloves when peeling to prevent your hands from itching. Then place in a deep pot, cover with water (about 1 inch above the last piece), bring to a boil, reduce your heat to a rolling boil and let cook about 20 minutes or until tender. This is when you’d also add the salt to the boiling pot with the taro.Since there are a few factors which will account for how quickly your dasheen or taro cooks, I cannot guarantee that your cooking time will be the same. I would test after 15-20 minutes using this method… using a sharp paring knife, stick it into a piece of the taro. If there’s no resistance, it means that it’s cooked. Please bear in mind that the top pieces (pieces from the top portion of the actual taro, called the ‘head’… where it was attached to the stems during growth) may take a little longer to cook. 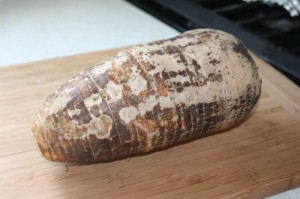 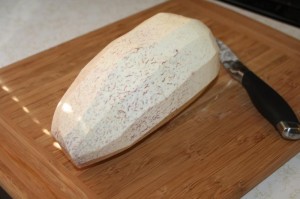 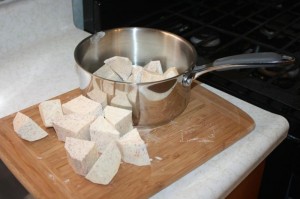 When the taro or dasheen comes to a boil you’ll notice some froth acquire at the top of the pot. Please spoon that out and discard. I believe that’s a combination of starch and some other impurities. While the taro was boiling I prepared the other ingredients for refrying it with. 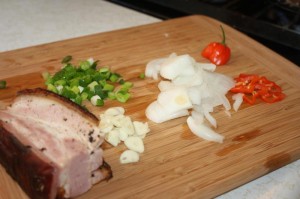 After about 20 minutes of boiling (with the lid off) I tested to see if the pieces were cooked, then I drained and began the steps involved in refrying. At this point is when you can enjoy with butter or make into a mash as I explained above.

I then placed the butter and oil into a sauce pan (fairly deep) under medium heat, then added the pieces of smoked bacon that I cut into cubes earlier. Allow this to cook for a few minutes, until you start getting crispy edges. 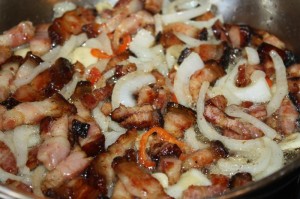 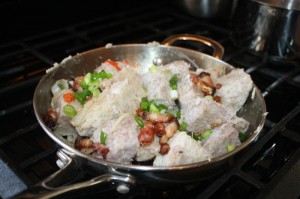 I then added the garlic, onions, slices of scotch bonnet and black pepper. Allow that to cook for a couple minutes to soften and infuse it’s flavor into the entire dish. The final step is to now add the pieces of cooked dasheen or taro, top with the green onions and stir. Allow that to cook for about 3-5 minutes, stirring occasionally. With the natural sugars in the taro, the edges may start to go golden, so you may want to reduce the heat a bit. I love this texture and the taste of the sort of burnt edges, so I allow mine to cook on high heat. That’s just my preference.

So now you know a bit about dasheen and/or taro and I do hope you give it a try the next time you come across it in the grocery store or roadside vendor. There was enough here to serve about 3-4 people as a complete meal.

Oye! before you go… Remember you can watch the cooking videos on the recipe channel and we’d love to interact with you on our Facebook fan page. There’s a few thousand of us already causing commesse on there… so do check it out.