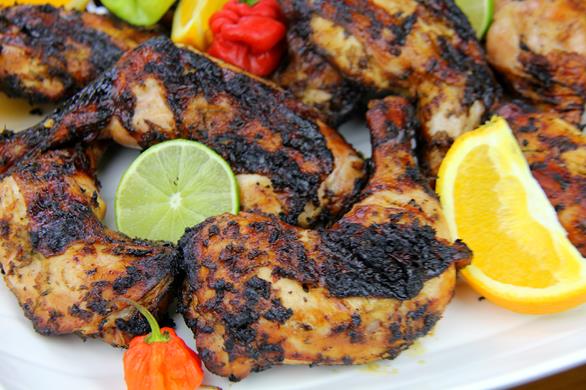 Over the years I’ve shared countless recipes for making jerk marinades, sauces, how to make finger-licking Jamaican jerk in the oven and classic jerk on your grill and bbq. As we continue our annual July Month Of Grilling I thought I’d shift focus and share a gluten friendly version of a classic Jamaican jerk marinade for our friends who deal with gluten intolerance. A jerk marinade which goes well with fish, shrimp, pork and in this case, some chicken legs which we’ll marinate before slowly cooking them over a moderate coals-fire in the back yard.

For the gluten free jerk marinade…

NOTE: It’s important that you go through the entire list of ingredients to ensure they meet with your specific gluten free dietary needs – especially the Soy Sauce. 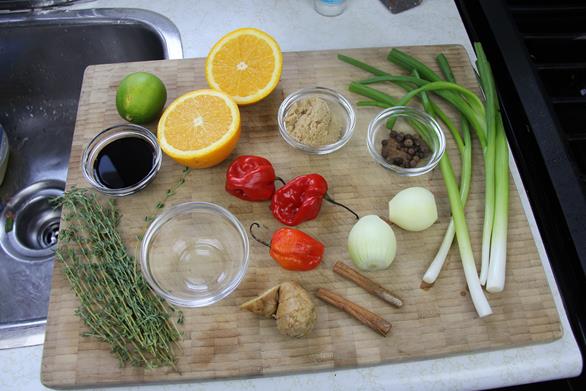 You’ll need a food processor or blender for making this marinade… or some knife skills as you’ll need to finely chop everything. Remember when handling scotch bonnet peppers to wear gloves and to wash your hands immediately after with soap and water. The “raw” heat will be in the seeds and white membrane surrounding the seeds, so trim and discard that area if your worried about such heat. Give everything a rough chop and place it in the food processor (or blender). 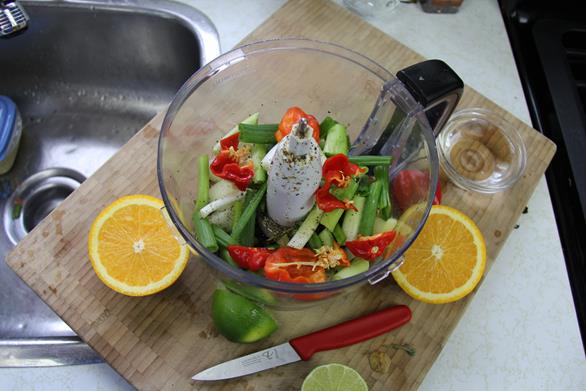 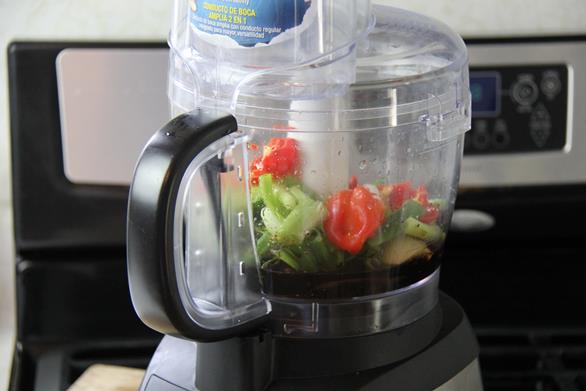 Here you have two options, you can puree until smooth, or do as I like – pulse so you get a sort of chunky consistency. You can now pour this over your desired protein or store it in a the fridge until you’re ready to use it. It will remain good for up to a week. The vinegar will act as a natural preservative.

In my case I was doing chicken legs with it, so I trimmed off all the fat and excess skin. You can remove the skin, but I like leaving the skin as it adds flavor as it cook and renders and it also helps to form a protective barrier as the chicken cooks so it does not go dry. I also like piercing the thick parts of the chicken so the marinade gets into the meat and really infuse it with maximum niceness. Pour in the marinade and massage the chicken pieces. Allow to marinate for at least 2 hrs in the fridge – overnight would be ideal. Then get ready to grill as you would normally. 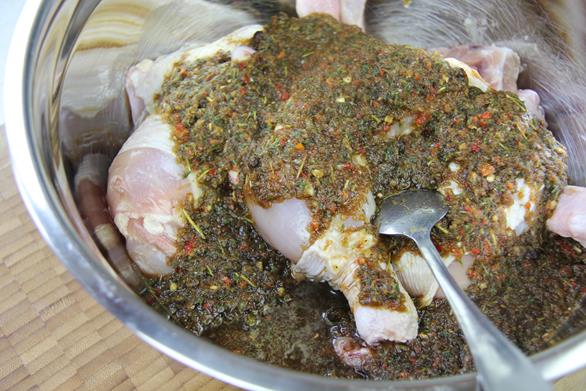 I had a relatively hot fire going, so I placed the chicken pieces away from the direct heat (indirect grilling), lid on and allowed it to go until it was cooked to my likeness (about 50 mins to 1 hr). I used the remaining marinade in the bowl to baste it the first 30 minutes or so – remember raw chicken was in the bowl, so try to cook off the marinade. Flip the chicken pieces every 10 minutes or so and rotate around the grilling surface so you grill them evenly. 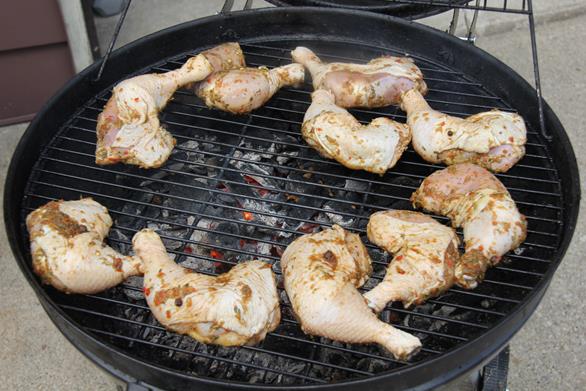 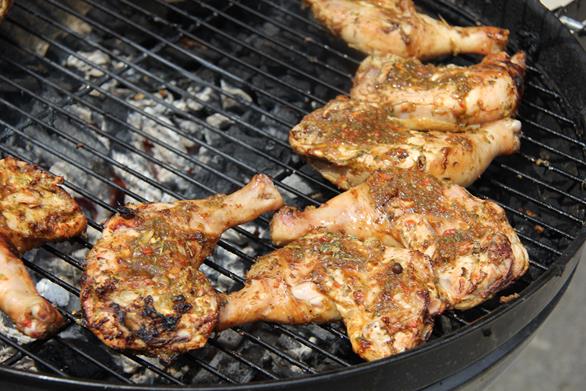 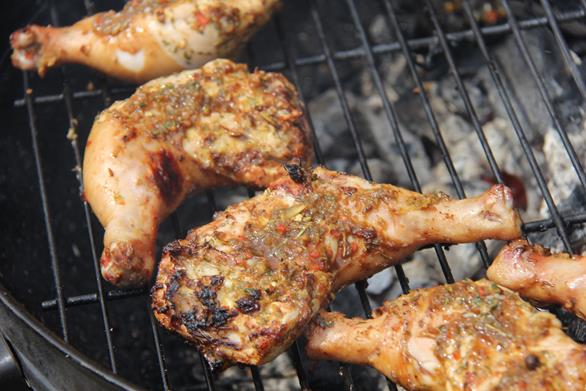 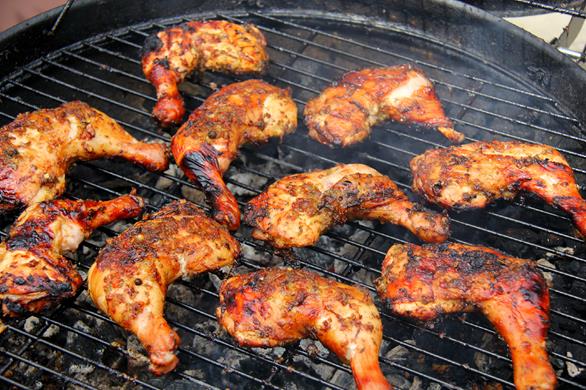 If you want, you can double the marinade recipe and reserve 1/2. That remaining 1/2 add a bit of honey, orange juice or apple and cook/reduce for a wicked sauce to serve with the cooked pieces of jerk chicken. 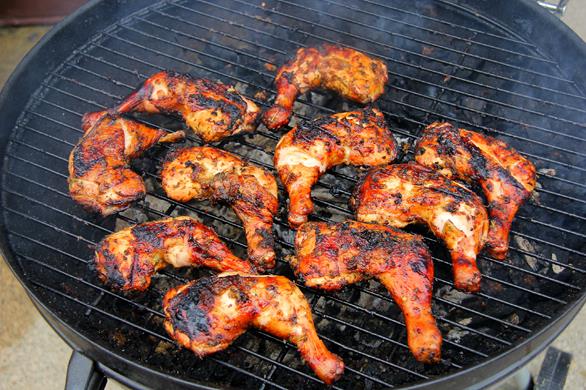 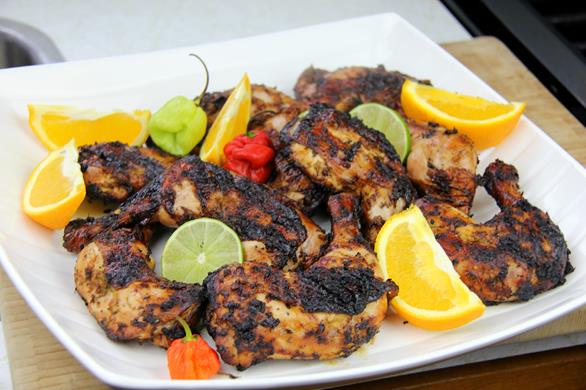 I like squeezing on some fresh lime juice as soon as I take it off the grill for that little blast of citrus, which I think awakens the jerk chicken even more. just my take though! 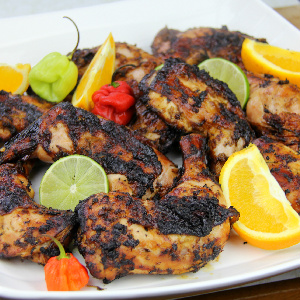