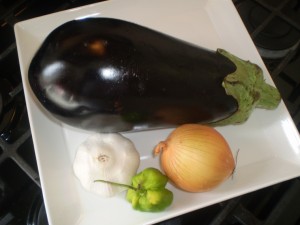 A few years ago Caron’s aunt and grandmother had stopped by for a visit as I was getting ready to put an eggplant on the BBQ to get it roasted for one of my favourite childhood dishes, baigan choka. When I explained what I was about to do, they mentioned that they had something similar before called baba ganush. Baba what? After looking up the recipe on the internet I could see why they had said that it was similar.

Couple pointers before we get to the recipe.

Buying  the baigan (eggplant). When at market or grocery try to get an eggplant that’s fresh looking. Look at the stem for a nice green colour and the eggplant itself should be firm to the touch, no markings or blemishes and shiny. Place the eggplant in your hand and feel the weight of it. You DON’T want something that’s “heavy” and too solid.  Those will be packed with seeds and not as fleshy as you’d like it to be. When you lift it, it should feel light for it’s size and almost feel hollow.

The pepper. Try to get a “young” green habanero pepper. A young pepper is one that’s not fully mature and you can tell this by it’s lack of luster and pale green colour. This will allow you to have the flavour of the pepper without much heat. The one in the pic is young, though it does not have the pale green colour I mentioned. From years of experience I can tell if the pepper is not mature yet just by looking at it. When you slice it open you should also see seeds that are white in colour and not mature… as if they’re just developing.

* Personally the pepper is one of the most integral parts of this recipe, so you’ll see that I use much more than most people. But the pepper can be optional since the garlic and onions does give the dish a good punch all on it’s own.

NOTE: I like roasting the eggplant on my BBQ or any open flame. The smoky taste is what I grew up on and will not change things. You may also stick in it your oven for about 30 minutes at 375-400, in your microwave on high (can’t say how long, since I’ve never done this) and back in the day my mom used to wrap it in tin-foil and place it on the open flame on the stove. The stove method is probably best of the 3 other methods I mentioned, but it can be very messy and your entire home will have that smoky / roasted smell.

Start by preheating your grill to about 400 degrees. Then trim the stem of the eggplant and using a pairing knife, stab some slits into it. Especially where it’s really thick and near the stem area as this will allow it to cook faster and evenly. I usually do about 5 slits, but this all depends on how large an eggplant you get. 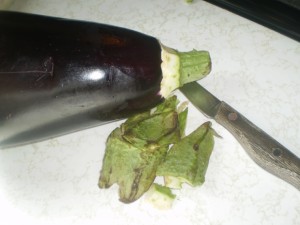 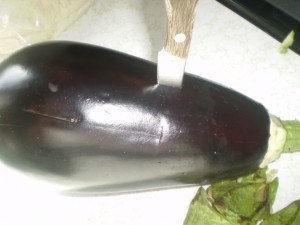 When the grill gets to temp, place the eggplant over the direct flame. Allow this to cook for about 25 minutes in total, but  turn/flip every 10 minutes or so to allow for even cooking. I usually place my pepper over the flame briefly as well, so it gets a bit charred. 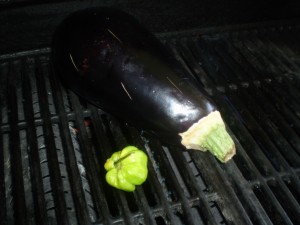 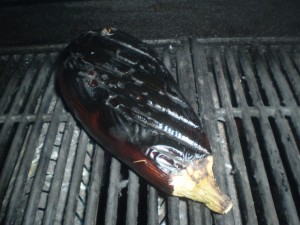 While this cooks… in a bowl add the salt, garlic (slice to make it easier to crush) and the pepper. Then crush to a fine paste. You can use a mortar and pestle. 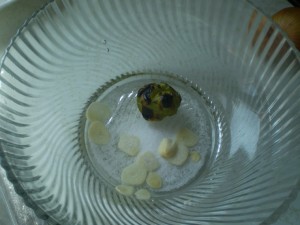 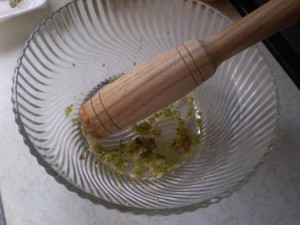 After the eggplant is done cooking, it’s time to take the cooked fleshy insides out for the dish. Do so by cutting across the top (just below the stem, then cut in the middle (top to bottom). Peel back to open and start scraping the cooked inside with a spoon. Place this into the bowl with the other crushed ingredients. Discard the empty shell like skin that’s left back. 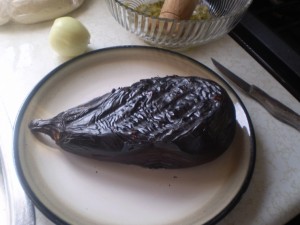 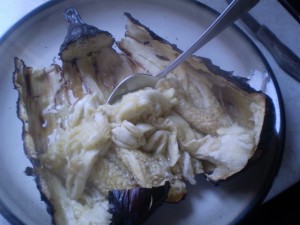 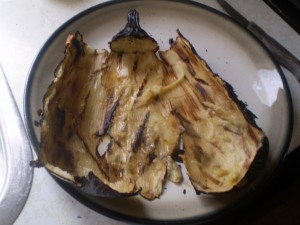 Using a pestle or potato masher (I have my trusty wooden pounder) mash the lot of cooked eggplant so there’s no clumps or stringy parts. Then slice the onions directly onto the mixture. Heat the oil over high heat and when it at the point where you can see smoke starting to escape from the frying pan, pour the oil directly onto the onions and eggplant. This will help cook the onion and add some flavour to the dish. My uncle says that he usually cooks the sliced onions in the oil before pouring it into the bowl. But I love the bit of texture and punch the raw onions adds. After pouring the oil, stir thoroughly and serve. 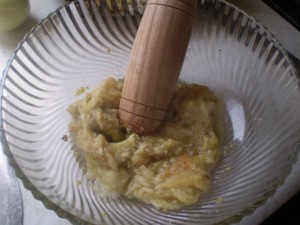 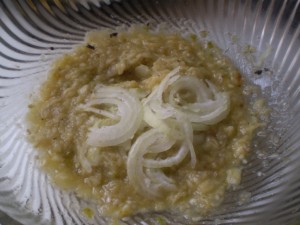 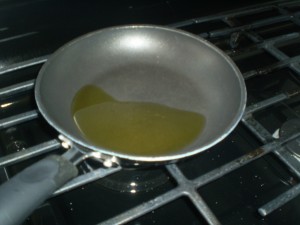 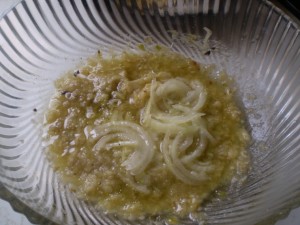 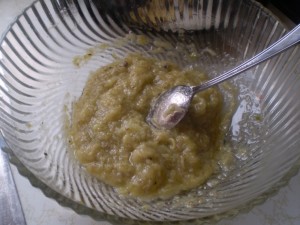 Used as a side for hot roti or fry bake, this can also be used for a dip with crackers, toasted flat bread wedges, pita and in wraps. I’m sure it will also go well with East Indian type flat breads such as Chapati,Naan and Luchi.

Do you have a different recipe for baigan choka? Leave me a comment below, I’d love to hear from you.

* Due to the roasting of the eggplant, the onions and the garlic… don;t eat this and be all up in your significant other face. You can floss, brush, listerine and use gum.. there will still be a hint of garlic left back.