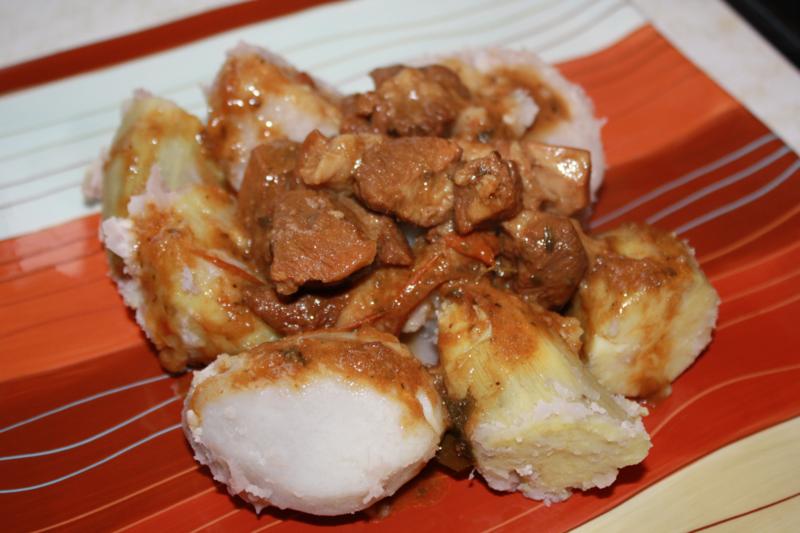 In this post I’ll attempt to explain what “Ground Provisions” are, the part it plays in Caribbean cuisine and a simple recipe for preparing everyday ground provisions. In previous recipes I’ve shared, I’ve commented on using ground provisions and over time I’ve come to realize that I had left my readers a bit confused when I did. It’s one of those things where you assume everyone knows what you’re speaking about and don’t give it much thought.

Ground Provision, Provision, Blue Food, Dry Food, Food For The Back, Country Food… yes, I just had to add some more confusion to the mix. These are just some of the other names people use when the refer to ground provision in the Caribbean (BTW if you have a different name for ground provision, do share with us in the comments below). And though it’s called “Ground” not all the items are directly from the ground. Ground provision or provision is one of the main staples I grew up on living in Trinidad and Tobago. That rice and flour made up a major part of our diet. I guess it can be compared to the way potato is used globally.

So what is considered provisions? Yam, Sweet potato, eddoes, dasheen, taro, tania, cassava, breadfruit, plantain, moko and green fig (banana). And for the most part, the most common way of preparing the majority of items, is by boiling. Like in the recipe I’m about to share below… 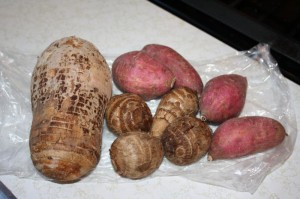 * I went looking for dasheen in the grocery store and saw what I thought was dasheen, but they had it labeled as Taro.
* Tip – When working with ground provisions, it’s best if you rub some cooking oil all over your hands or use a pair of latex gloves, as you may find that your hands may itch from handling them when peeling.

Peel the eddoes, sweet potato and taro and cut into chunky pieces, but make sure they’re about the same size (I usually just cut the sweet potato and eddoes in halves) so they cook uniformly. If you’re peeling them in advance of cooking, be sure to place them in a deep bowl and cover with cool water to prevent them from going discoloured. 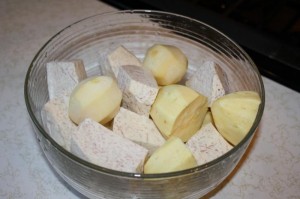 I’ve seen where people put  a pot of water to boil, then add the provisions, but I much prefer to place the peeled provisions into a deep pot, cover with water and then bring to a boil on a high heat. When it comes to a boil, you then add the salt and turn the heat down to a simmer. 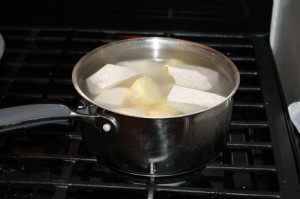 As it boils you’ll notice some stuff start to settle at the top, that’s mainly starch and other impurities that you can spoon off and discard. 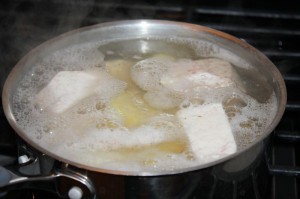 Allow this to boil for about 20 minutes or until you can pierce through a piece with a sharp knife without any resistance. While cooking this taro I noticed that it did cook faster than the sweet potato and eddoes, so I would suggest you either remove the taro after 15 minutes or so, or add them to the pot after the other provisions have been cooking for about 5 minutes. I much prefer removing, as if you add it during the cooking process it will lower the heat within the pot and you’ll have to adjust the heat.

The next step is to drain as you would if you were boiling potatoes and then enjoy. The options now are endless as you can re-fry these as I did in the “yam recipe” and the “cassava” recipe or eat them with stewed meats, make a pie as I saw being made in Tobago with bread fruit or simply top with some butter and/or cheese and enjoy. Two classic combinations for ground provisions are provision with tomato and salt fish and provision with saltfish buljol. And if you like eddoes, be sure to check out the eddoes talkari recipe I shared a while back.

With the provision I cooked above I had it with stewed pork – see pic below: 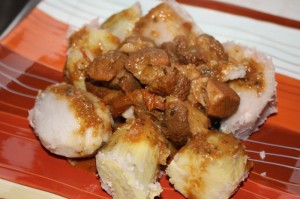 One of the things the majority of us from the Caribbean miss when we leave the shores of our beautiful islands is definitely the abundance and ease of getting fresh ground provisions. Whenever I get homesick I rush out to the many ethnic grocery stores to find some yam, dasheen, eddoes, green bananas or cassava (as a last resort only) and if I’m lucky I can score a breadfruit. A classic “oil down”  using breadfruit simmered in stewed pork and coconut milk is the ultimate in comfort food for me. Not only is it packed with many layers of flavours, but it takes me back to my childhood when my dad and his friends would be up all night playing “all fours” and the menu for the night was oil down.

Yes, provisions makes up a huge part of everyday Caribbean culture and cuisine… what would Saturday soup be without provision?

During world war 2 when everything imported was rationed, my dad told me that provision was “king”, as there wasn’t much rice and flour entering the islands. And those who once frowned on what was considered “poor or country people” food, had no choice to to resort to eating it.

Leave me your comments below or join us on facebook for the lively discussions.