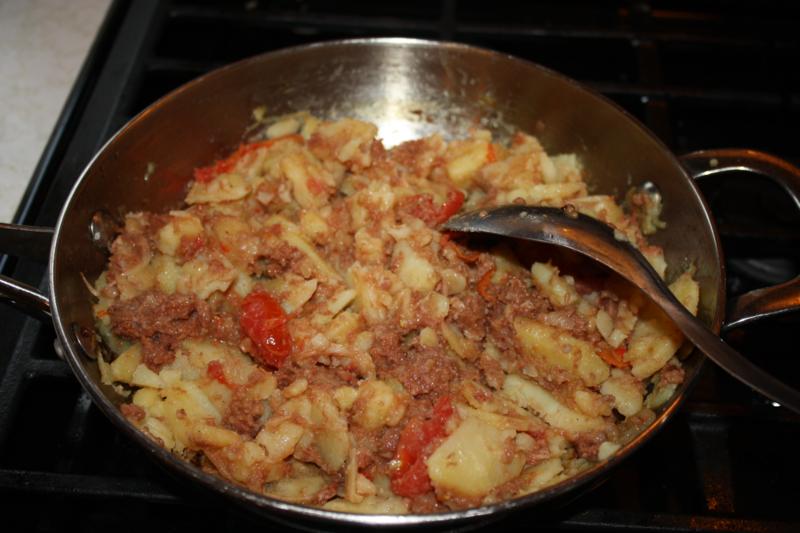 I was hoping to be a bit more creative with the title of the post, but it is what it is. After posting a pic on the Facebook fan site asking everyone to guess what I had cooking on the stove, someone responded by saying it was corned beef hash. Rewind a few years back and we were on the Caribbean Princess cruise ship en route to Antigua when I had my first experience with corned beef hash.  Not until the person on Facebook said it looked like corned beef hash, did I clue in as to why I love it so much. I went every day after, up to the main buffet while on the cruise, hunting down corned beef hash. This fry aloo and corned beef was a hit of mine since I was a kid and that hash satisfied some serious craving.

Whenever my mom would have leftover corned beef from the day before, she would add it to the fry aloo the next morning for breakfast. I also recall she would add leftover, stew chicken, beef and/or pork… gosh those were some good days for sure!

With the leftover corned beef I saw sitting in the fridge, I knew the time was right to make this dish. For those of you who’ve been following my cooking exploits to date, will recall I did both at fry aloo and corned beef recipe a while back. And for those of you wondering what “aloo” is, it’s just another word for potato.

So here’s the Caribbean take on corned beef hash.

Note: If you don’t have any left over corned beef, use  1/3 can of a good canned corned beef. My fave is Hereford, as it’s the least fatty of the ones I’ve tried in the past. Simply empty it into the fried potato and mix it in. No need for the other ingredients I used in the normal corned beef recipe.

Peel, wash and slice the potato in somewhat thin slices. I usually cut each in half (long way), then slice.  Give it a quick rinse under cool water to remove some of the starch. Then heat the oil in a pan and add the sliced onion, garlic and hot pepper and allow that to cook for a few minutes on medium heat. Until you start seeing golden edges. 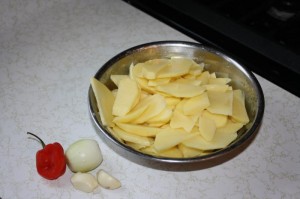 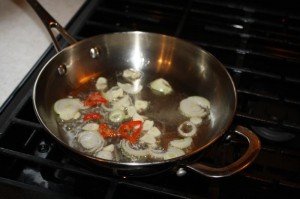 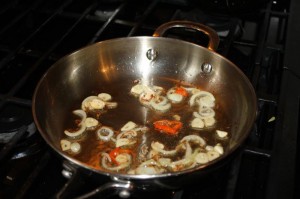 Drain off the potato if you had it sitting in water to prevent it from going discolored and add the slices to the pan. Give it a good stir so everything gets coated with the onion and garlic. Turn down the heat to medium / low, cover the pot and allow that to cook for about 15-20 minutes. Keep an eye on this as it will start sticking to the bottom of the pan – that’s natural. So stir every 3-4 minutes and turn down the heat if you find that it’s sticking too much. 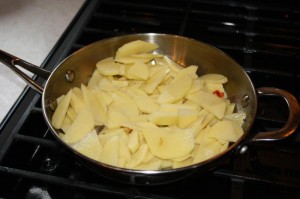 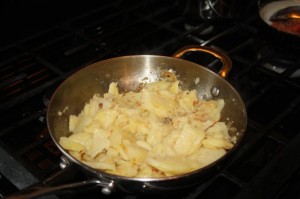 Those brown bits at the bottom of the pot is where the real flavor in this dish is. Trust me! After the 20 minutes or so, the potato should be falling apart and tender (see pic above). It’s time to add the left over corned beef, or a 1/3 of a new can. Give it a good stir and cook for another 5 minutes with the lid open. You don’t want this going overly soggy. 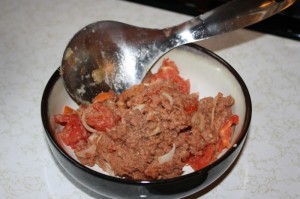 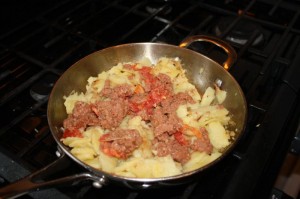 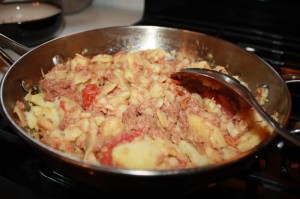 I can eat this all by itself, but it’s great with sada roti or fry bake , as a side for breakfast with eggs etc and you can always grab some bread (slice, hops, pita..etc) and make some sandwiches. Before you rush to the kitchen to whip up a batch of this, please leave me your comments below – even if it’s just to say hello. It’s appreciated!  Don’t forget to join the commess (chat) on facebook by clicking on the image on the right side (upper part of the page).