My early years in Canada saw me falling in love with pita, as it was the closest thing to sada roti that I could get. Hamilton in those days had 1 or 2 Caribbean restaurants, but none of them served any type of roti. The same can be said today, except the two that I know that does have roti now, absolutely sucks! In many homes in Trinidad and Tobago Sada roti is consumed as cereal or toast and eggs would be in North America at breakfast time.

It’s a common misconception that Sada roti is difficult to make and people avoid trying. Today I’m here to prove that making roti is very simple and only takes about 30 minutes. You can even cheat and use a food processor to prepare the dough 🙂

In a fairly large bowl combine the flour and baking powder, then start adding the water as you knead the dough. Remember to dust your hand with some four to help prevent the dough from sticking to your fingers. The goal is to create a large smooth dough ball. I didn’t add any salt, but I’m sure some recipes will call for salt. That is entirely up to you. Keep dusting your hand with flour as you work the dough. If you’re using a food processor, simply add all the ingredients and combine. Tip add 3/4 the water to start and add more if necessary so you won’t end up with a soggy dough.

It may take about 5 minutes to knead the dough, after which cover the bowl and allow the dough to “soak” (rest) for about 15 minutes, as my mom would say.

The next step is to divide the dough ball into 3 smaller (but even) balls, as the big one would be too big for the roti we’re making. These would be perfect for the size of roti we have planned.

The traditional way to cook roti is by using a tawa (see pic below), but if you don’t have one, no worries. You can achieve the same result using a big non-stick frying pan. Heat the tawa or pan on medium to high heat. If this is the first time you’re making roti or working with dough, I’d recommend that you get the first roti ready first before heating the tawa. This way if you run into any problems rolling out the dough, the tawa will not over heat.

Dust a clean surface on your counter top (must be dry), get one of the smaller dough balls then flatten a bit and work the dough with your fingers (as I’m sure you’ve seen pizza makers do) . Continue dusting with four to avoid sticking and start rolling with a rolling pin. Flip over, dust with flour and roll again. We’re trying to get a well rounded (don’t worry about shape at this point.. you’ll perfect it soon enough) roti shape. The diameter will be between 10-12 inches and about 1/4 inch thick (or less)

Gently pick it up using both hands and place t to cook on the heated tawa or pan. Allow it to cook a couple minutes on each side, by flipping it as it cooks (you may need to use a spatula to help flip it as it will be hot). You’ll notice 3 things as it cooks.. it will increase in thickness, it will start getting a bit brown and it will start developing air pockets. This will lead you to the final step. Swelling the roti.

There are 2 ways to swell the roti which I’ll share with you below. The traditional way and the easy way 🙂

The traditional way I’ve seen my mom “swell” the roti, is by shifting the tawa away from the burner so half the tawa is directly over the flame, then in a circular motion move the roti over the direct flame. So half the roti will be on the tawa itself and half will be moved over the flame. You’ll notice that the roti will create a huge air pocket. This is what we mean when we say “swell” the roti. There’s a more traditional term used for this process, but I don’t recall what it is at the moment. If while using this method and you notice that only a part of the roti swells, press gently on the roti and the air pocket will move throughout the entire thing. Be very careful not to burst any holes, as steam will escape and you risk getting burned.

Note: If you do decide to use the traditional way to “swell” the roti do remember to use an oven mitt to prevent burning your hands and fingers.

The EASY and fool-proof way to swell the roti. After you’ve cooked it on both sides for a couple minutes and it starts to go brown… little air pockets or bubbles will start forming. Remove it off the tawa or frying pan and place it in your microwave (use a tea towel / paper towel or it will sweat on the direct surface), set the microwave on high and cook for about 30 seconds. You’ll be amazed at how fast and perfect it will swell.

Let’s go through the steps again..

Knead flour > allow to rest for 15 minutes > make into 3 smaller dough balls > flatten and cook on tawa for a couple minutes on each side >  then swell > enjoy! I told you it was simple!

You’re probably wondering why the big deal about “swelling” the roti. This is so that it becomes lighter and makes a great pocket for stuffing. Using a sharp knife, cut the roti into 4 pieces as you would slice a pizza and stuff as you would a pita sandwich or enjoy slices with your favourite “talkarie”.

TIP: Wrap in a towel or paper towel to store after cooking. The idea is to keep it sealed from direct air or it will go hard and crusty. You can store in the fridge in a zipper bag (wrapped in paper towels) for a couple days and reheat in the microwave. I’ve never tried freezing this type of roti, though I’ve frozen other type with great success. 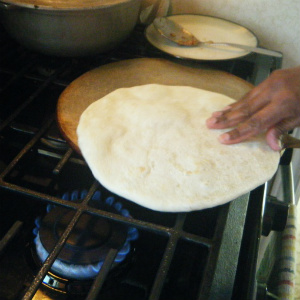