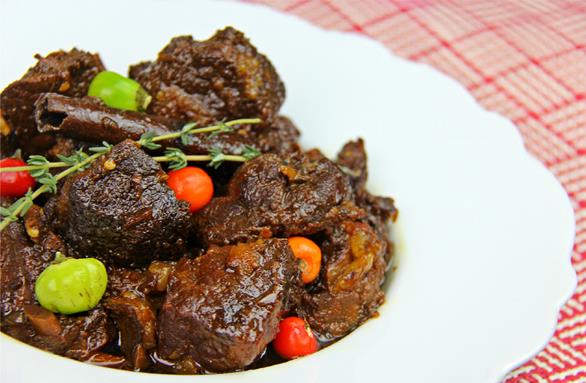 When you hear a Guyanese person speak about Christmas the conversation always heads in the direction of Pepperpot. You have to love the passionate manner in which my fellow Caribbean people speak about this  lovely meat stew most Guyanese serve on Christmas morning with a thick slice of their traditional plait bread. The tender pieces of meat falling of the bones and the rich gravy…. oh that rich gravy! You’d rip a piece of the bread and dunk in into that lovely gravy, spiced with cinnamon, herbs and cassareep (a thick molasses like reduction made from cassava).  Other that what goes into making the pepperpot, patience is key… low and slow and you’ll be rewarded. 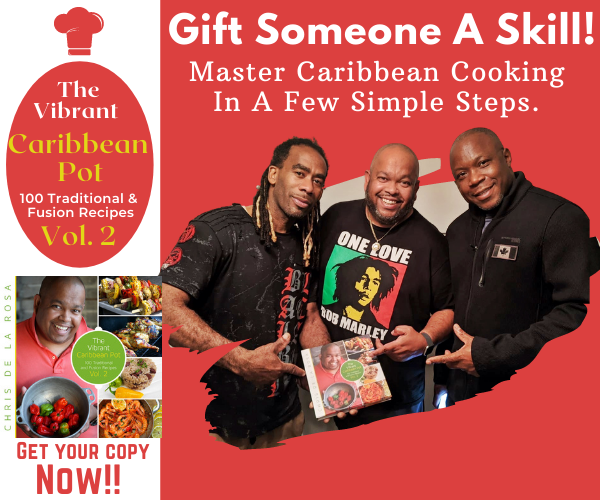 Note: I’ve seen my cousin’s in-laws who are Guyanese make this dish with strictly goat meat and I know others who uses a combination of meats as I did.. but they also add pork, oxtails, trotters and even cow heel. So the choice is yours. 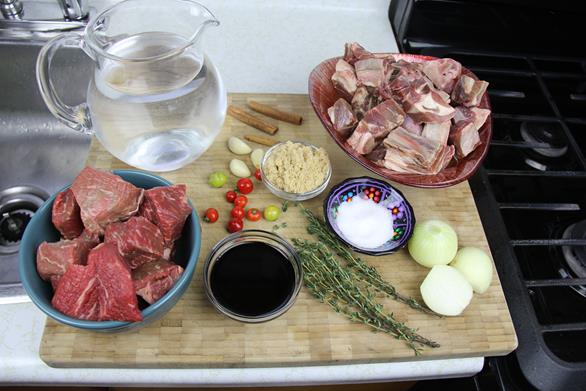 Have your butcher cut the meats into the same size pieces and try your best to trim off as much fat as you can. I personally like using a combination of meats with bones and boneless. So the goat meat had the bones, but the beef was indeed boneless.

In a large/deep pot, heat the oil and add the pieces of meats (wash and drain first) and try to brown a little. Then add all the other ingredients (except the water) and give it a good stir. Next up add the water (make sure everything is covered) and bring to a boil. 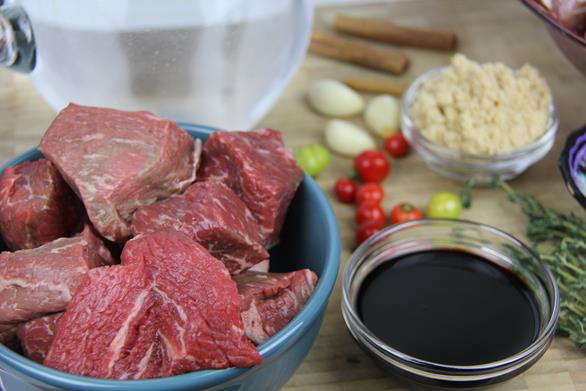 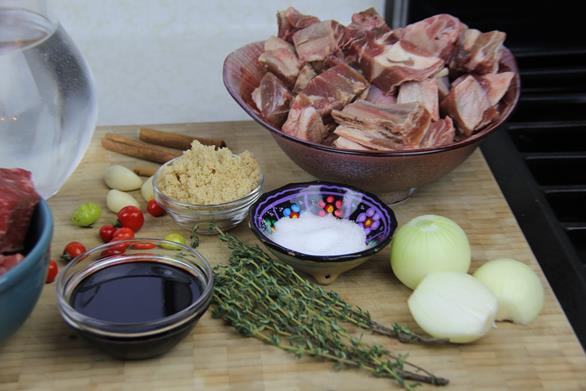 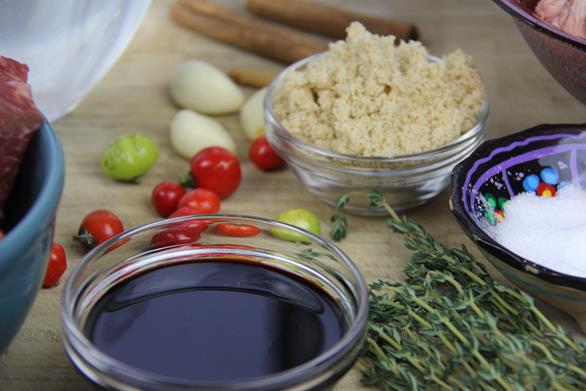 You will note that I kept the peppers whole so I get the flavor and not the raw heat (you can remove them before serving and try your best not to break them open). 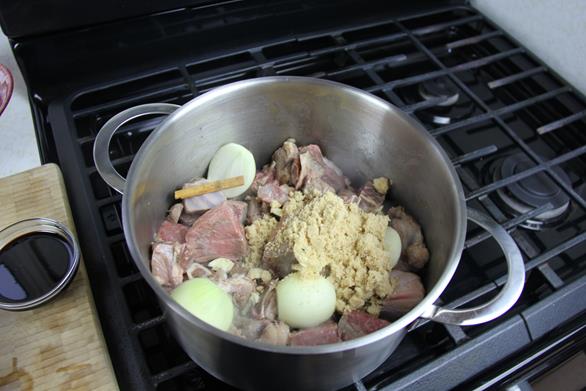 As it comes to a boil you’ll need to skim (and discard) the sort of scum at the top of the pot and during the 3 hr braising process, you’ll want to do the same for any oily fats you see on the surface. Now that it’s boiling, reduce to a very gentle simmer, cover the pot and let it go for 3 hrs. Yes, you can use a pressure cooker to help with the lengthy cooking time, but to be quite honest.. you’ll loose some of that lovely flavor you ONLY get with slow cooking. 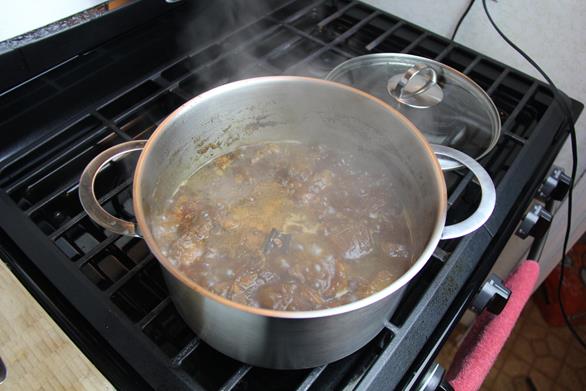 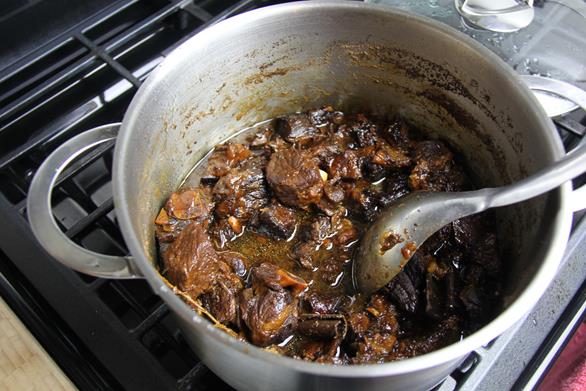 After 3 hours the liquid would have reduced by about 3/4, so it will be intense in both color and flavor, for what I believe is one of the most tasty Caribbean gravy you’ll ever enjoy. Guyanese pepperpot is something cooked a couple days before Christmas and remains on the stove, gently heated every time you need a fix. Personally, I much prefer my Pepperpot with cassava dumplings or ground provisions (that’s probably the country boy in me). 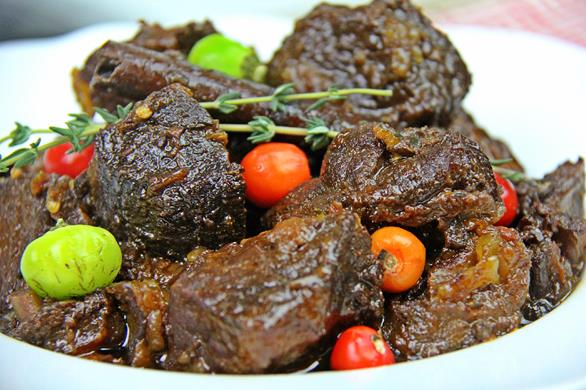 Thanks for all the email requests for this recipe as I much enjoyed having that lovely aroma of the cinnamon throughout my home for the 3 hours of cooking. My girls told me the scent reminded me of Christmas… and they’re not Guyanese! 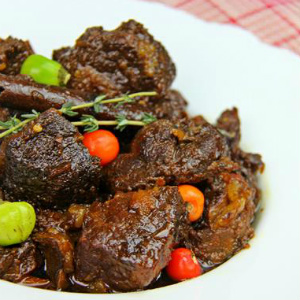