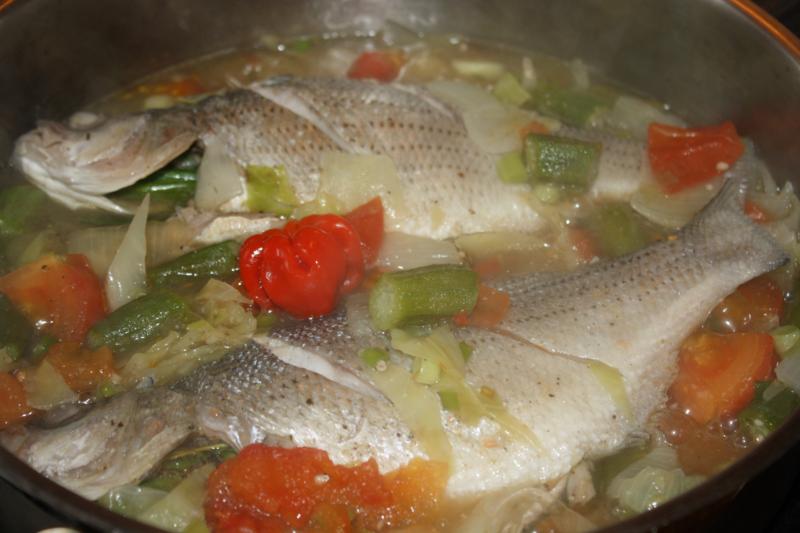 Here’s another dish we tore-up while on our Jamaican trek a few weeks ago. As a youth on the islands I enjoyed fish three ways.. curried, stew and in fish broth. Non of which was an easy sell for our to get us to eat. So this steamed fish was new to me… especially when I saw it being served with crackers and bammy (cassava flat bread). At first seeing a fish that looked as if it was boiled and with no real color to it, was not all that appealing to me. However after the first bite I could only think “I was missing out all these years”.

It was day 5 into our 1 week vacation and we were out about town in Portmore around 11 pm, when we decided on having fish tea. But that only sparked our appetite and we ended up with plates platters of massive steamed red snapper. The most exciting yet funny thing about this meal was the fact that you’re led to a huge fridge with freshly caught fish and you have the opportunity to choose which fish you want cooked. So there we were standing in front of this sort of chest fridge and it was my turn to choose a fish.  The red snappers were huge and I knew I would struggle to finish one, but the next option were parrot fish. Have you ever seen a parrot fish? There was no way way I could eat something so beautiful. I didn’t say I couldn’t eat that pretty fish (though they were the perfect size), so I settled for the big-ass red snapper.

Here’s my take on this classic Jamaican steamed fish dish.

* I didn’t have any garlic, so I opted to use about 1/4 teaspoon garlic powder. Traditionally I’ve seen vinegar and some butter used in preparing this dish, however I’m no fan of vinegar and we could all do without the fat from the butter.

* I opted for Sea Bass, but a more sturdy fish like Red Snapper is better suited. Not only was the sea bass cheap (don’t ever go looking for fish around Good Friday at the market), it’s a nice mild fish which I find works well with the other ingredients in the recipe. The dish is not over-powered by a fishy taste.

Start by heating the fish stock or water in a fairly large pan (one with a cover) and allow to simmer. If you can’t get fish stock, try to get a package or 2 of fish tea. I suppose you can use vegetable stock as well if you wish. To that we’ll add the ochro (okra) which we trimmed the stems off and cut in half. We also gave the onion a rough chop and added it to the simmering stock, as well as the chopped cabbage. Place the lid on the pan and allow to reduce for about 5-7 minutes on low heat. 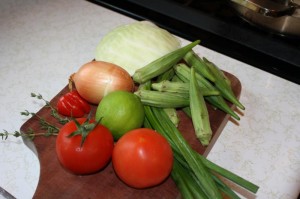 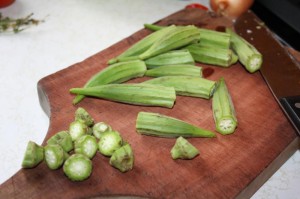 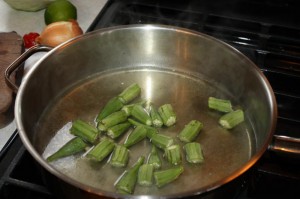 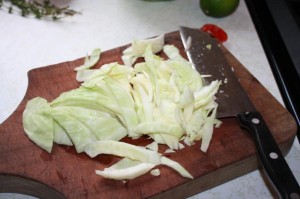 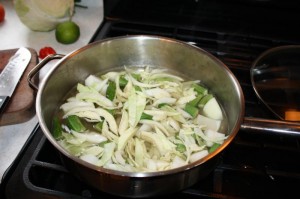 Place your fish in a large bowl (I assume you already have it cleaned), squeeze the juice of the lime or lemon over the fish, then rinse off with cool water and drain. We’ll now chop the scallions into halves, then keep the green ends about 4-5 inches or so and dice the remaining pieces. Fine chop the 1/2 of scotch bonnet or habanero pepper and rinse off the thyme under cool water, but keep intact (on the sprig). You’ll notice that I trimmed the gills, fin and tail off my fish.. I can’t stand seeing those things on the fish when I’m eating it.

If your fish is not cut down the middle of the belly, do so, so we can stuff it with the seasoning. Take about 3 sprigs of thyme, 1/2 of the scallions (greens), 1/2 of the chopped scotch bonnet pepper and a dash of black pepper and stuff the cavity of each fish. In the pics you’ll notice that I forgot to make a couple cuts along the sides of the fish (I did so later on). Please do so now so the fish will cook faster and the flavors will absorb nicely into the fish itself. 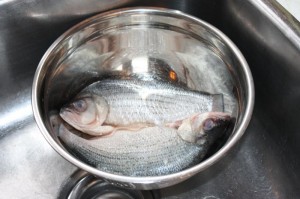 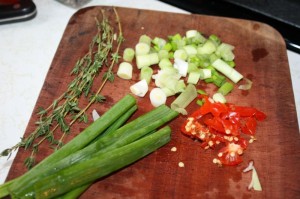 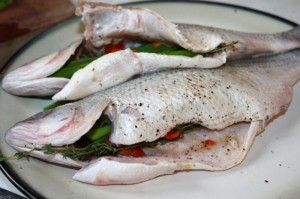 Now add the chopped tomato, garlic (or garlic powder), the rest of the black pepper and the seasoned fish into the pot. You may need to make room so the fish sit deep as possible in the pot. Give the pot a shake and spoon some of that rich broth we created over each fish. Bring to a boil, place the whole scotch bonnet on top, then reduce the heat to a simmer and close the lid. Let this cook for about 10 minutes. Remember to add the salt and near the end do taste to see if you need more. The fish stock I used had salt in it already, so that accounted for some of the salt in the overall dish. Do adjust accordingly. 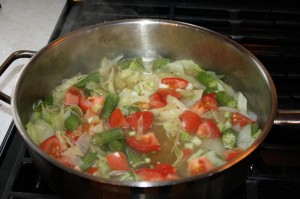 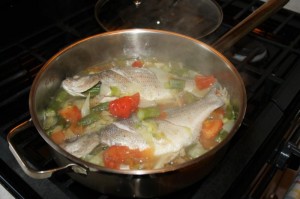 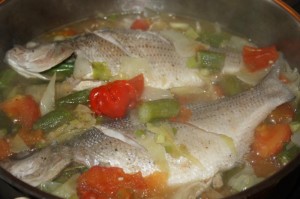 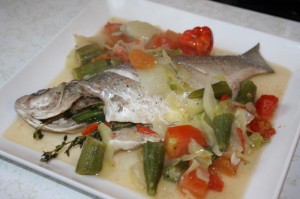 As I mentioned above, this steamed fish is usually served with crackers and/or bammy, but I was quite full with one of these,  some of the ochro and cabbage. Before I go I encourage you to join us on Face Book, Twitter and do check out the cooking videos. Yea.. leave me your comments below – it’s always appreciated!

Before you go calling me a wuss, take look at how pretty this fishy is…