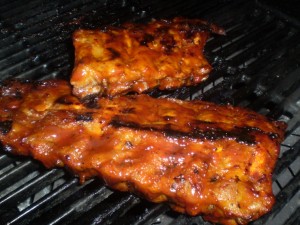 Since the post I did a couple weeks back went over so well (Some BBQ tips and techniques for chicken) I thought I’d share some pointers with you on achieving tender and juicy ribs. The biggest mistake I ‘ve ever made in my brief cooking avocation, is when I purchased ribs in one of those vac-sealed bags that’s pre-seasoned. YUK! I’m sure you’ve been tempted if not already fell for it and lived to regret it. The batch I purchased was pre-seasoned with some sort of sweet Thai chili thing.. just plain old NASTY! I make good, if not great ribs from scratch and I was hoping this would turn out good, especially since it was on sale and I’m always looking for a deal.

Here are some pointers to achieving a wonderful BBQ dinner with the special guest of the evening, ribs!

Don’t ever boil your ribs!  The problem with ribs is that they can be a bit tough and ornery. They are full of collagen, and if not cooked properly, they will be incredibly tough and chewy. You want fall off the bone BBQ ribs, and you can achieve this by boiling them, but it’s a bad idea. When you boil ribs, what you are effectively doing is making a pork broth. You are stealing a lot of the delicious potential flavors from the ribs, and they will be much blander and more one dimensional when cooked this way.

What you really want to do is sort of roast the meat. BBQ is a low heat method of roasting, and by dry roasting will concentrate the great flavors of the meat.

Low and slow! The secret to tender BBQ ribs is a long cooking time over a low temperature. If you roast these slowly, the collagen in the meat will transform into luscious gelatin, and the meat will be tender and flavorful. You want to keep the heat between 250 and 300. Lower than 250 and you risk drying the meat, and higher than 300 is getting too hot for tenderizing cooking.

Probably the most important tip I can give to you other than cooking low and slow is…  Take off the silver skin. The silver skin is a membrane that is attached to the underside of the bones. You can’t chew it and marinades, rubs and sauces can’t penetrate it. It’s got to go. Take a knife and pry a little bit off, then grab it with your fingers ( I use a paper towel as well) and peel the while thing off.

Season the ribs the night before you plan on cooking them. Rub whatever spice rub you’re using on the meat the night before, to give it enough time to penetrate and flavor the meat. 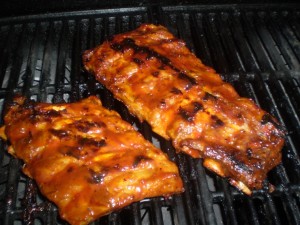 Cook them over indirect heat. Rib connoisseurs will convince you that without some sort of smoke flavour you’re not really appreciating the “true” essence of BBQ ribs. I HATE smoked ribs, so I stay very far from this technique.  With the indirect method of grilling, all you’re doing is placing the rack of ribs on the section of the grill with no heat. I light half the grill and have the other half bare of any flame.

We were over at our friends’ place last year and as a young couple they were excited to show off the new stainless steel grill they got and their BBQ skills. However, they marinated the raw ribs in BBQ sauce. Don’t sauce until the ribs are done (they’re done when you lift up the rack in the middle a bit, and it threatens to split in two). When they are done, heat the grill up to medium and grill the sauced ribs for a few minutes. If you want to achieve very sticky ribs like our girls like, baste, baste and baste with tons of BBQ sauce near the end.

Leave me your comments or suggestions below.