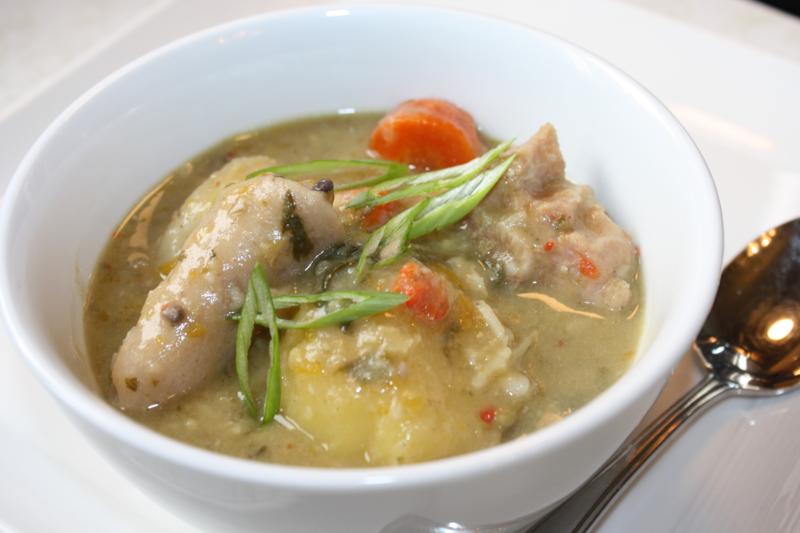 Sancoche, is one of those soups we make in the Caribbean which can be identified by various other names from island to island.  Basically is a thick soup with everything but the kitchen sink in it. Loaded with ground provisions (yam, dasheen, cassava, eddoes, sweet potato.. etc), split peas, flour dumplings, coconut milk and some sort of salt meat or smoked bones for additional flavoring, it’s one of those meals where the ethnic fatigue kicks in after a bowl or two.

As a young fella growing up on the islands one of my favorite things to do, was go with friends when they were making “bush” cook. I grew up in the country and that usually meant most of our weekend off from school was spent in the outdoors. I recall swimming for hours in the river while this pot of soup would be bubbling away on three rocks made to support the pot while allowing room for fire wood beneath it. Usually set under the confines of the shade from a bamboo patch. With the cool temperature of the spring fed water as it makes it’s way down the mountain to the spot where we’d swim, a hot bowl of soup would definitely hit the spot. When it wasn’t sancoche, it would be fish broth, some sort of “wild” meat with provision or if times were hard for us to source ingredients it would be dasheen bush cooked in coconut milk and served with some massive flour/cassava dumplings.

Note: This pot of soup is enough to feed a small army. So you may want to cut back the ingredients list by half and it will serve 5-7 people as a main course. I usually freeze the leftovers, but for some reason the ground provisions does not reheat well after freezing.

Pigtail – I used salted pigtails and wish I had some salted beef to add as well. You can also use regular beef cubed, smoked bones or any sort of soup bones. I guess you could also make this with chicken as well or leave meat entirely out of it and have it vegetarian style. You’ll have to adjust the salt if you’re not using salted meats.

Spinach : The traditional thing to use would be young dasheen leaves, but since I couldn’t source any, I opted for regular spinach.

Ochroes: I used about 16 small ochroes (about 3 inches long), but all I could get was the dark green variety. Avoid those if you can and look for a lighter green variety. I find that they stand up better to the slow cooking process and the texture is a bit different than the dark green ones.

Salt : Since I used salted pigtial in this soup, I only needed about 1 tablespoon. I would suggest that you not add any salt, but taste about 15 minutes from the end and add according to your preference.

Grace Cock Soup : If you can’t get Grace Cock soup, feel free to use a couple cubes of Maggi chicken bouillon or as a matter of fact, any chicken stock/bouillon cube should work well. I use the Grace cock soup as I love the extra level of flavour it adds with it’s unique spiciness.

It looks like a lot of ingredients but as I mentioned, I’m cooking a huge pot.. The fisrt thing to do is to prepare the salted pig tails. Using a large chef knife or cleaver (or ask your butcher to cut it for you), cut into 2 inch pieces. Rinse off under cool water, then place in a deep saucepan and cover with water (not the water mentioned in the ingredients list above). Bring that up to a boil and keep it at a rolling boil for about 25 minutes. This will take some of the brine and salt the pigtails were preserved in. After the 25 minutes, drain, rinse and set aside. 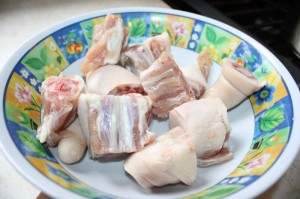 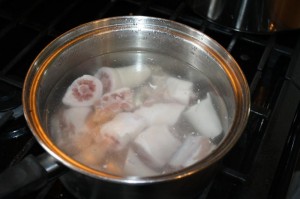 In a large soup pot, heat the vegetable oil and then start adding the chopped onion, garlic, thyme, chandon beni (alternative – use 3-4 tablespoon of chopped cilantro) and scallion and cook for a few minutes on med/low heat. Then add the pieces of salted pig tail, the split peas (wash before adding) and top with about 8 cups of water. Bring this to a boil, then reduce to a simmer and allow to cook for about 45 minutes with the pot covered. This will allow the split peas and pig tail to get tender before adding the other ingredients. 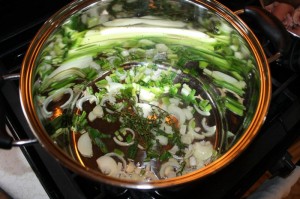 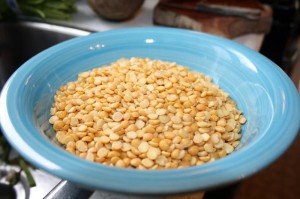 While this cooks, lets get the ground provision, carrot, green banana and potatoes  peeled and cut into chunks. You’ll notice that I tried my best to keep the size of each piece uniform. This will allow it to cook evenly. I cut the pieces of pumpkin a bit smaller, as I like for it to dissolve a bit while cooking so it helps to add a wonderful overall color as well as it gives it some body.

Remember to wear gloves (latex or rubber) when peeling/working with ground provisions, especially the eddoes and green bananas. Or rub some vegetable oil over your hands. This will prevent the sort of staining and avoid your hands going itchy. 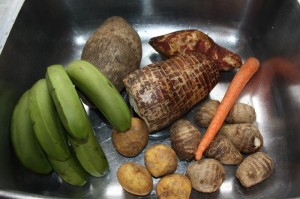 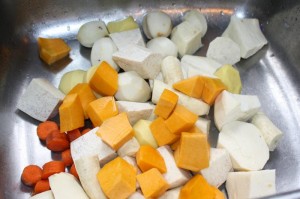 After the soup base has been cooking for about 45 minutes, it’s time to add everything else. Add the ground provisions, salt, cock soup and scotch bonnet pepper (keep whole if you want the flavor and not the heat). Then trim off the stems off the ochroes and cut in 1/2 before adding to the pot. You’ll need to add a further 8 cups of water as well as the coconut milk at this point. Just make sure everything is pretty much covered by liquid.

The final step is to rinse off the spinach and give it a rough chop before adding to the pot. It will look like a lot, but it will wilt down as it cooks. Bring everything back up to a boil, cover the pot and reduce to a gentle simmer. Allow this to cook for another 45 minutes or so. Stir occasionally and don’t fret if you find that the ground provision starts to dissolve. We want this soup to be thick, like a North American beef stew. 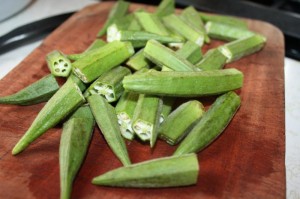 You will notice that some stuff will start building up at the top while this boils… skim it off with a spoon and discard. Remember to taste for salt the last 15 minutes or so and adjust accordingly. For extra heat, burst the pepper near the end as well, and at this point you can remove the sprigs from the thyme. 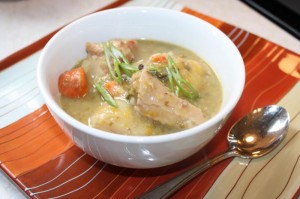 Traditionally you’d find flour dumplings in this soup, but I simply ran out of room in my pot… yea I could hear some of you saying “where’s the dumpling Chris”. Another way to add extra flavor and some additional body to this soup, is to add a couple packs of chicken noodle soup instead of the chicken bullion or stock powder. And if you have some Goldenray butter, feel free to toss in a tablespoon or 2.

If you guys join the chat on the Facebook fan page, you’ll notice that Anthony K, made a very good observation… “you either have to try to make it or know a trini who will make it for you, (the only problem is you can’t make a small amount)…it’s great and I don’t really care for soup”. Which so true, I’ve never seen a small pot of this cooking.

Before you go, why not take a couple minutes and leave me your comments below. Even if it’s just to say hello… it’s always appreciated. And don’t forget to check out the Caribbean Cooking Videos.