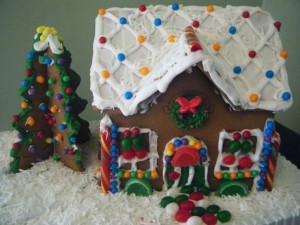 Christmas for me growing up in the Caribbean was not as much about gifts and the shopping madness that seems to take over the spirit of the season in North America. It was more about food, family and fun times. The lovely aroma you’d get Christmas eve all the way past Boxing day as homes were engulfed with stews, curries, soups, baked meats and wonderful cakes and pastries being baked. Boxing day was pretty close to that childhood memory this year, as we were celebrating my mom’s birthday so there were lots of goodies being prepared.

As our guests arrived and made their way into the “action” I noticed that one of my cousins had brought me a bottle of Punch-de-Creme that my aunt (her mom) had made just in time for Christmas. Punch-de-Creme is one of those things you’d only get around Christmas time, and though this is not a “kid” drink… as kids we did sneak a sip or two whenever we got the chance.

Punch-de-Creme is basically a rich creamy drink that’s infused with strong rum for that added kick. It’s like the Caribbean version of Bailey’s. I didn’t get a chance to speak with my aunt for the specific recipe she uses, but after many drinks were shared that night…  just about everyone had a recipe to share with me on making Punch-de-Creme. Add booze and people will instantly become experts at just about anything.

From all the “ole” talk, here one I think would produce a great final drink…

* Note: The traditional way to make this is with with strong “over proof” rum, but feel free to use the 40% proof rum that seems to be the norm in North America. I also noticed that some people preferred to use dark rum, while others liked using white rum. The choice is all yours… or what you may have available.

Note: Since I don’t like using eggs in it’s raw state, this recipe calls for gentle cooking of the eggs (almost custard like)

Crack the eggs into a mixing bowl, put in the lime peel and beat until fluffy. Now remove the lime peel, add the evaporated milk, and mix thoroughly.  Pour into a the top pan of a double boiler and cook, stirring continuously until the mixture thickens and coat the back of a wooden spoon.. Remove from the heat, pour into a mixing bowl and add all the other ingredients except the rum and bitters.  The final step… Ensure that the mixture is thoroughly cooled then add in the rum and bitters and mix.  Bottle immediately.  Serve chilled or on ice.

Store in the fridge! 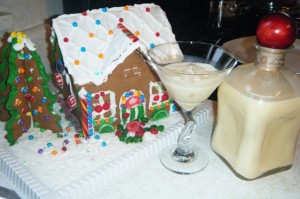 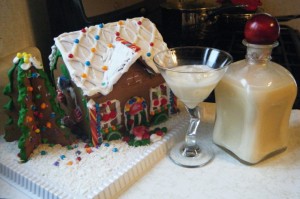 Since as I mentioned this was gift I received from my aunt, I don’t have the normal step by step pics I usually post with every recipe. I do apologize for any inconvenience. The pic of the gingerbread house in the background was built by our middle daughter, Tehya. Added it to the background for the festive mood.