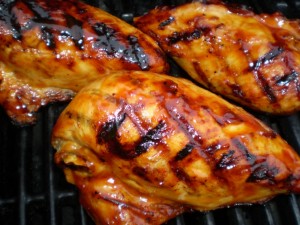 This was supposed to be a guava glazed grilled chicken recipe, but like old Mother Hubbard… the cupboard was bare when I went rummaging. My mistake. My sister gave me a bottle of jam she had brought back from the islands her last visit and for some reason I though it was guava jam. After-all, that’s one of the main jams we make on the islands. It turns out it was pineapple jam, so I had to improvise. The final texture of the glaze was a bit different, since the pineapple jam was a bit fibrous and not as smooth and gelatin-like, like guava jam.

I leave for the islands in a few hours (been counting down the hours just like when I was a kid and we had to go on a school trip) so I’ll try to get some homemade guava jam to use when I return on the guava glaze. If all fails, I’ll just pick up some local guava jam in the grocery store.

This is very basic, but adds a new twist on regular grilled chicken. Normally when I do grill chicken breast, it’s usually the ones with the bone and skin still attached. However this time all I had were the skinless variety, but at least it wasn’t boneless. Boneless and skinless chicken breast can become dry very fast on the grill if you don’t know how to control your heat and proper grilling technique.

Remove any excess fat from the chicken breast and rinse with the juice of 1/2 a lime or lemon and water. Then sprinkle with a little salt and fresh ground black pepper. 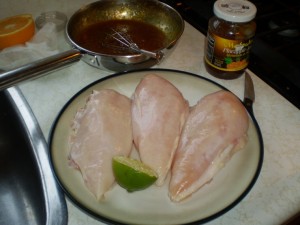 For the glaze.. put the jam, pineapple juice, dash of salt / pepper, mustard and orange juice and heat on low to medium heat in a saucepan. Using a whisk, blend everything together as it comes to a simmer and allow to form a smooth thick texture (less than 5 minutes). Place this in your metal bbq sauce pan with brush. I use a metal container so I can put it on top of the BBQ as the chicken cooks, so it remains warm. 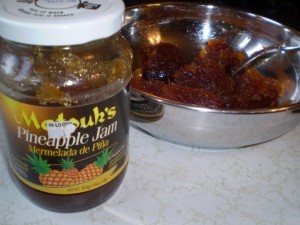 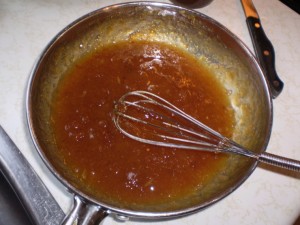 Grill your chicken as you would normally do, but don’t start glazing until the last 5 minutes of cooking. If you put the glaze on too early, you’ll find that it will burn before the chicken is fully cooked due to the natural sugars in the glaze. I normally bring my grill to between 350 and 400 degrees and cook the chicken (depending on thickness for about 20 minuets or so. During the grilling process I flip the chicken a couple times and turn them on the angle to get the lovely grill marks. 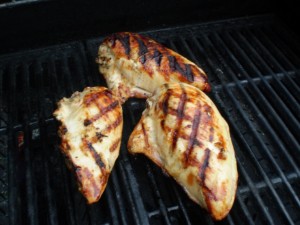 Here’s the same chicken after I’ve glazed it a few times with the pineapple glaze from the recipe above. I usually turn the heat down a bit on the BBQ and brush the glaze on as I flip the chicken over a few times. 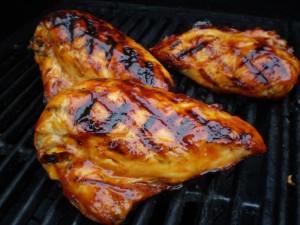 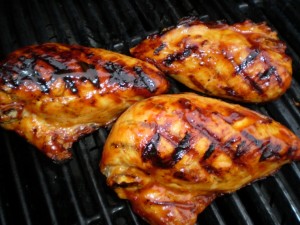 As mentioned above, I’ll be away on the islands for a little under 2 weeks, so I may not have time to post any recipes until then. However, if I become the designated cook during our stay I’ll be sure to give my sister’s kitchen a test drive and post some recipes here. Also check out the CaribbeanPot YouTube channel on a regular basis as it’s my intention to show you a bit of the culinary culture of the islands during my stay! Including street food, markets and anything else relating to food and dining.