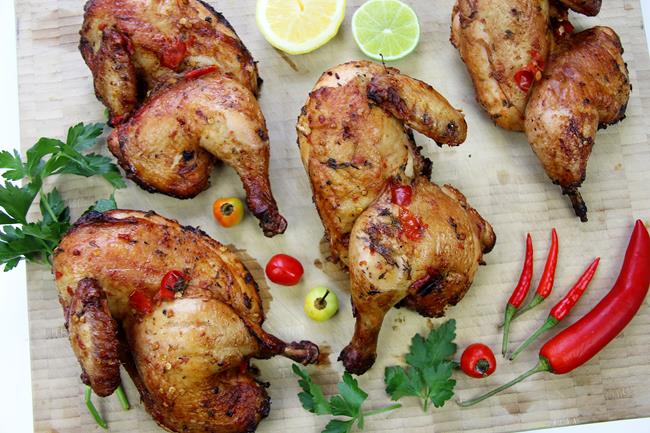 After my birthday dinner at Nandos compliments of Indy, I came back with an urgency to give Peri Peri chicken a try. While not a “Caribbean” dish I feel it’s a dish we would definitely relate to, due to our connection to Africa and Portugal. The Peri Peri chicken at Nandos was good, however I found a true ‘depth’ of flavor was missing and the ‘promise’ of heat fell short. Yes, as a son of the Caribbean I do appreciate a bit of heat. So here’s my take on Peri Peri chicken.

Important. If doing this recipe gluten free, please go through the entire list of ingredients to make sure they meet with your specific gluten free dietary needs.

If using a blender or food processor, place all the ingredients (except the chicken) in it and pulse until you have  a relatively smooth paste. In my case I added the thyme (leaves), salt and  peppers (rough chopped) in my mortar and using the pestle I crushed it a bit chunky. I then add the other ingredients and gave it a good mix.

I used a large bowl.. then transferred to a strong zipper bag. Trim off the excess fat off the chicken, make sure they are free of feathers and clean. Then pour on the marinade and mix well. Place the bag with the seasoned chicken in the fridge (on a plate in case there is a leak in the bag). For best results keep it marinating overnight and try to toss it around a couple times before you head off to bed. 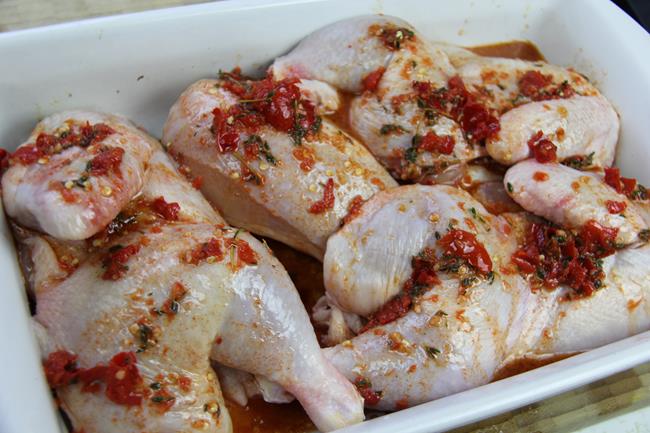 I like my marinades a bit chunky, but feel free to pulse until a bit smoother if you want. The next day I removed the bag out of the fridge before I went to get my coal fire going, so the chicken would come back up to room temperature before we placed them on the grill. For juicy chicken I’d recommend grilling these over an indirect heat source. Basically away from direct contact with the heat. 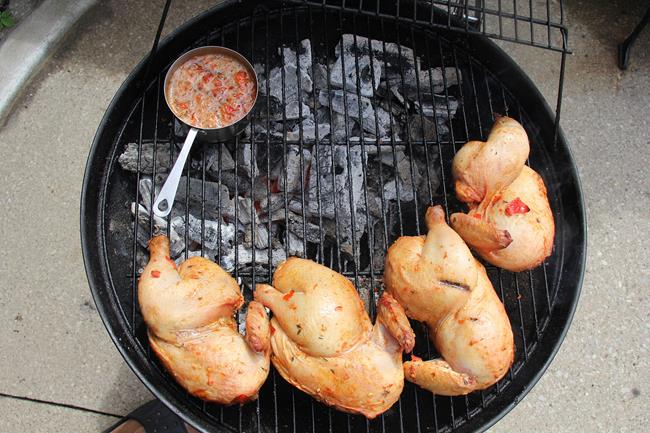 With the chicken on the outskirts of my fire, I placed the remaining marinade from the zipper bag in my metal grilling pan over the direct flame to gently cook it. I used this to baste the chicken pieces as they grilled. If you’re using the leftover marinade to baste the chicken and you have no means/plans to cook it, remember to stop basting after about an hr so you have enough time to cook off the raw marinade which has been in contact with the chicken.

Remember to flip the chicken pieces and shift them around so each piece is in the direction of the heat source. I HIGHLY recommend using a coals fire for maximum flavor. Yes a propane grill with work and you can also do this Peri Peri chicken in the oven (leave a comment below if you’d like the oven instructions). 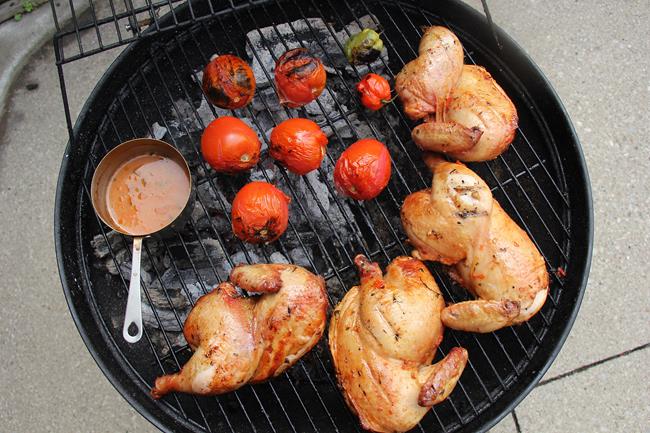 Since I had a wonderful fire going I also roasted off some tomatoes and scotch bonnet peppers for a quick Tomato Choka. In total it took about an hour and forty (1hr 40 mins – covered) to grill off the chicken pieces. Now this will change depending on the size of your chicken pieces, the temperature of your grill and how close to the heat source you place the chicken pieces.

Do remember to baste occasionally with the leftover marinade. The last 10 15 minutes you can go directly over the flame to get the skin somewhat crispy. We purposely left on the skin to help protect the chicken from drying off while they grill and the rendering of the skin/fat will moisten the chicken at the same time. 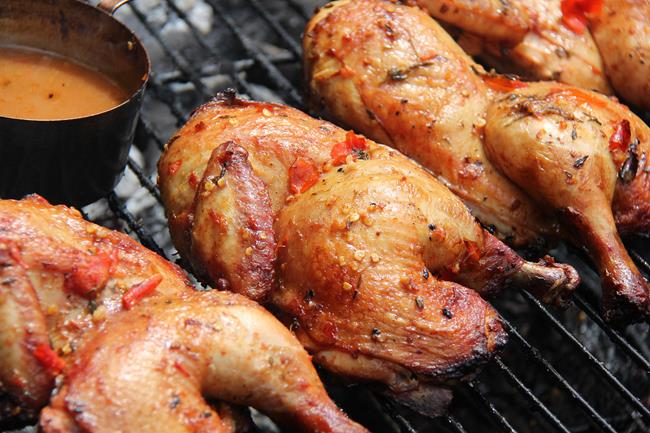 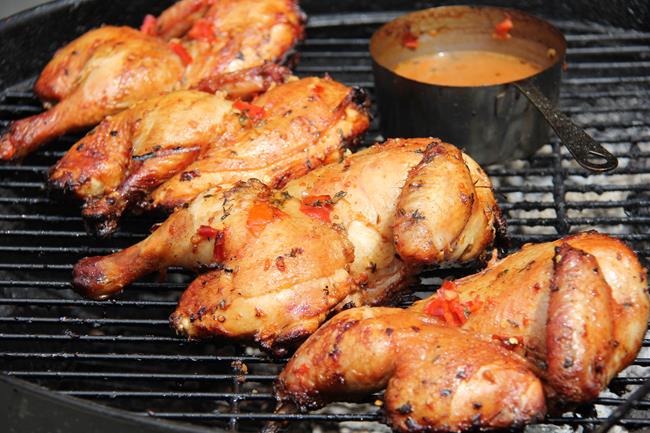 As we continue the annual #JulyMonthofGrilling I do hope you give this Peri Peri Chicken a try, it’s succulent, packed with flavors and very simple to put together. Who needs Nandos when you can make your own and be in full control.. especially the salt which I personally think Nandos was a bit heavy with.

Being second only to the English as slave traders, the Portuguese appeared in Trinidad at a much earlier date than is generally supposed. In the 17th and 18th century, the small Spanish colonies that settled from time to time were supplied with slaves by these Portuguese traders whose headquarters were in Brazil. The north and east coasts of Trinidad had large plantations which were also used as slaves depots.

The first Portuguese colonisation made no roots in the islands and never got beyond the fringe of coastline. They mostly traded in slaves and shipped whatever produce these slaves grew while at the coastal depots to Europe in slave trading vessels, going back across the Atlantic for another load of human cargo. With the slowing up and eventual abolishment of the slave trade, these Portuguese settlement disappeared from the island.

The second colonisation—that which is the origin of the Portuguese community of today— occurred under more credible circumstances. It was comprised of refugees who had fled the island of Madeira in the 1850s. They were Protestant, and the religious persecution begun by the Lisbon government at the instigation of the Catholic church had become alarmed at the inroads made in a former stronghold of the faith by Scottish Presbyterians. Excerpt: The Portuguese in Trinidad by Jean de Boissiere


Got a question in regards to this recipe? Please tell us at Ask Chris.