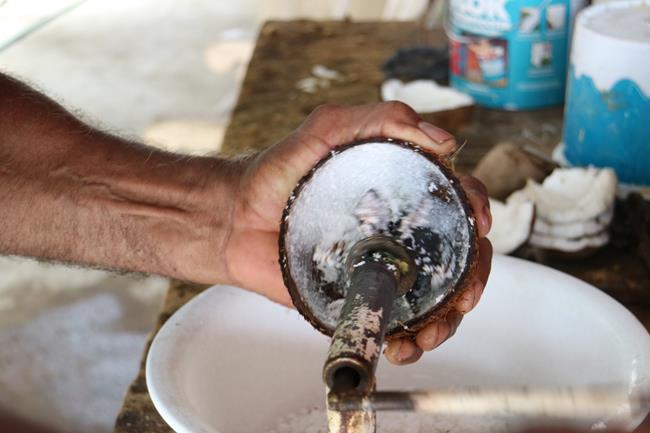 As a kid growing up on the islands coconut oil was a norm. Not just for cooking, but it was our choice of skin lotion / moisturizer and it was also part of our daily hair treatment. If memory servers me correct I think my my sisters also used it in making their version of cocoa butter and different types of fragrant soaps. During my most recent trip to the islands dad shared his technique for making coconut oil as it was passed on to him from my great grand parents.

* In a future post I’ll show you a more modern way to make this, but for now let’s look at the traditional way. Please follow along by watching the video below.

We had about 12-15 dried coconuts with the husk. Using a machete dad removed the outer husk, then cracked the dried coconut in half. He didn’t remove the hard outer shell as the device he would be using to remove the ‘meat (white coconut kernel) didn’t require the removal of the hard shell.

Basically all he did was grate the dried coconut meat into shreds. This is how it would be traditionally grated. Remove the hard outer shell so all you have are pieces of dried coconut ‘meat’ and grate on a box or homemade grate (as in the pic below). With all the coconuts grated it’s now time to separate the milk from the grated coconut. 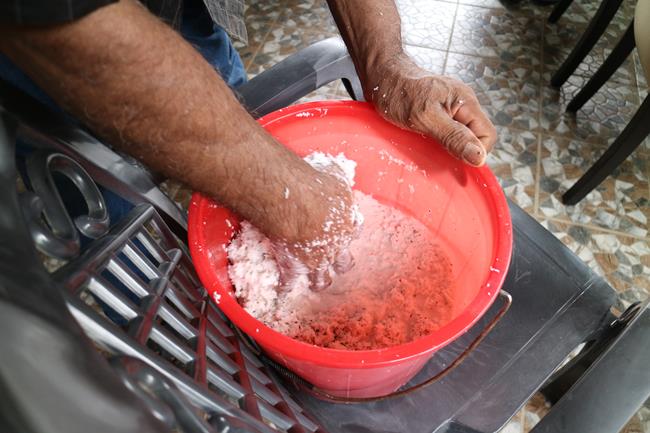 After you’ve squeezed out all the liquid, strain and set aside. Add back about 5 cups of water to the grated coconut for a second round of separation. Then strain again and mix with the first batch of coconut milk. BTW, you just made coconut milk. 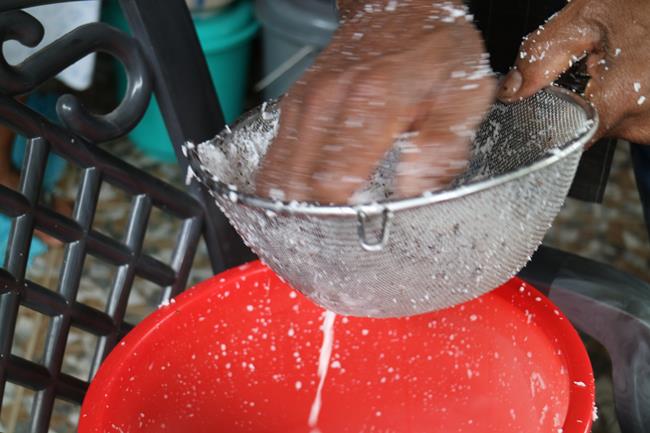 IMPORTANT.. you can add this liquid immediately to a pot over a high flame and cook down. However it will take too much time and energy. After a couple hrs in the fridge, it’s now time to skim off the coconut fat or cream. The time in the fridge means the liquid would have settled and the fat would have come to the surface. Using a large spoon, remove the tick top layer (try to not get too much water) and place in a heavy pot. You can then discard that water/liquid that’s left back. 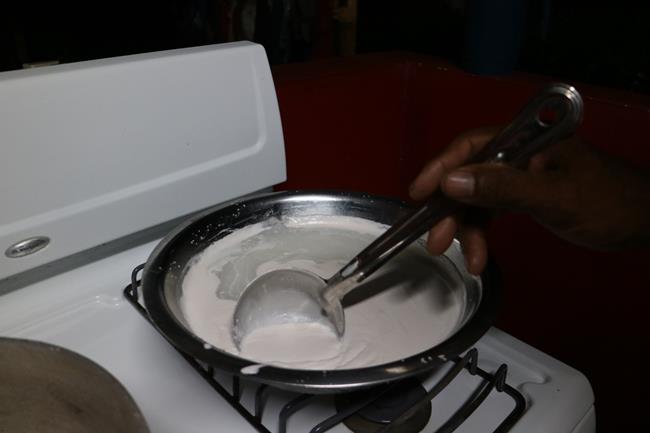 Put the pot with the coconut fat/cream on a med/him flame and all we have to do now is burn off all the liquid/water until we start seeing the oil. 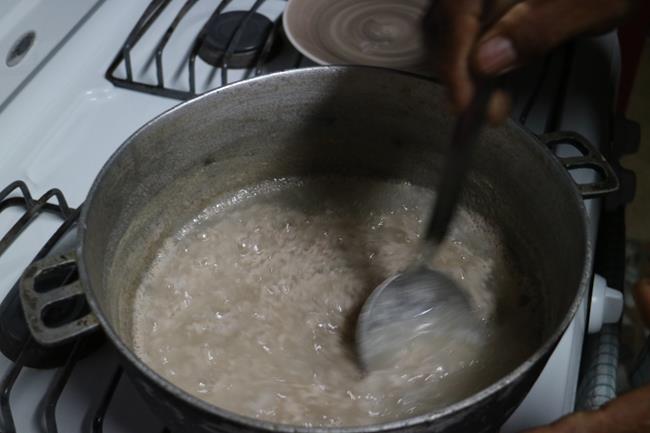 It will take between 1.5 and 2 hours.. depending on the yield of fat you got and amount of water you used. Keep the heat at about med/high and stir often. The goal it to remove all the water or the finished coconut oil will go rancid fast (have a short shelf life). You will end up with a bit of residue (I don’t recall the name my dad called it, but he gave me some on crackers to eat.. quite sweet and tasty). To ensure he got all the water out, he removed the oil from the residue and placed it in another pot on a medium flame for about 10 minutes. The longer you cook it the darker the oil can potentially go. 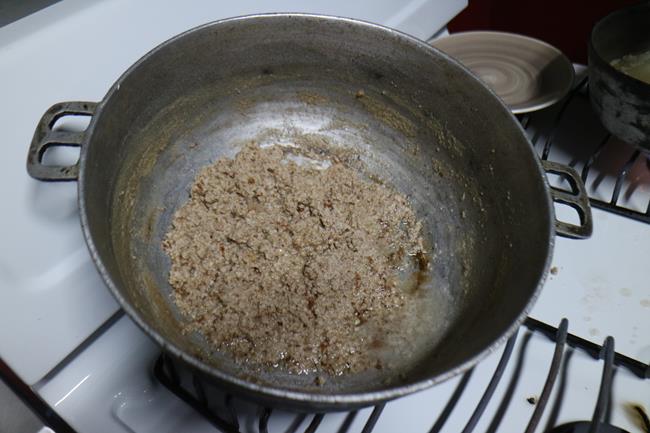 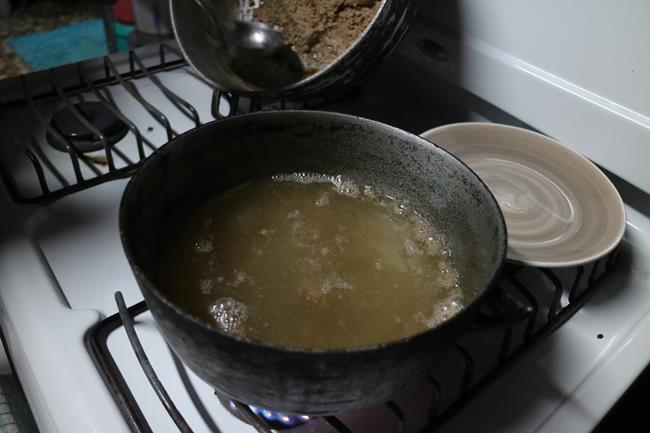 Basically all you have to do now is allow the oil to cool for a couple hours, then strain into sterilized bottles. 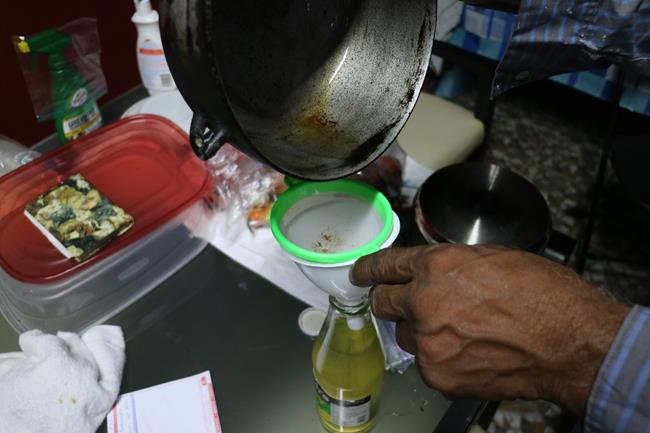 Should my instructions be confusing, please refer to the video below. Special thanks to my dad for the knowledge. The homemade coconut oil can last for months as long as you burned off all the water and used a sterilized bottle/container to store it. No need to place this in the fridge.