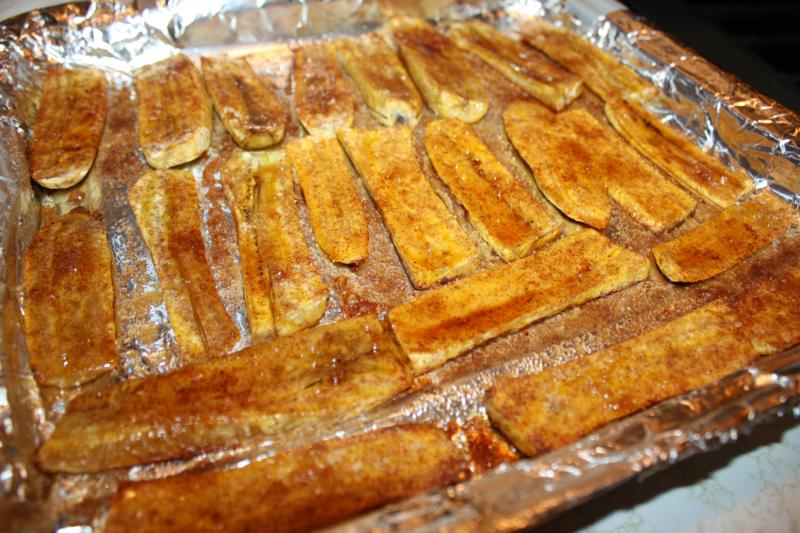 I have a weakness for plantain, which means I can’t walk by the display at the grocery store and not put some in the shopping cart. A lot of times they go bad on the counter and I know this… but I just can’t help myself.  Yet again I had some on the counter in the kitchen calling out to me (or was that Caron saying “are you going to use these or let them go bad again?”) so rather than fry them as I would normally, I decided to be a bit creative.

With the addition of the spices and sugar this could easily be considered a dessert, or used as a topping for some good coconut ice cream, but I much prefer it as a side to my rice dishes and the leftover I made sandwiches with. Toasted bread with a thin layer of butter and a few slices of this wonderful cinnamon plantain slices.

Recipe Edit Notes. In the video I posted below I failed to mention a few things. The plantains I used would have been better if they were a bit riper and I think it would be much tastier if you gave them a good brushing of melted butter. The butter would allow the brown sugar to caramelize and form a lovely coating on the finished slices of plantain. 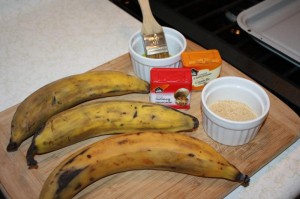 Start by trimming off the ends of the ripe plantains and discard. Then cut in half length-wise and peel off the skin (see the video below to see how I did it).  You will now have two pieces of peeled plantain… slice off (lengthwise) a piece about 1/4 inch. Now use this sliced surface to sit on your cutting board to make slicing the rest of the plantain easier. Slice 1/4 inch pieces and set aside. 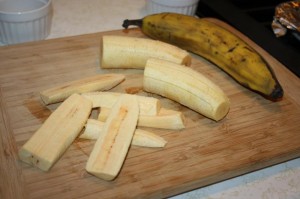 Mix together the cinnamon, pinch of nutmeg, salt and brown sugar until it’s completely blended. 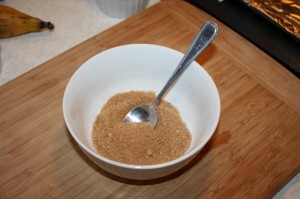 Line a baking sheet with aluminum foil (makes clean-up easier) and brush it with oil to coat the surface. Now place the slices of ripe plantain on top, brush with the olive oil and sprinkle (generously) the spice mixture we just made, evenly on each piece of plantain. (See my note above about using butter) 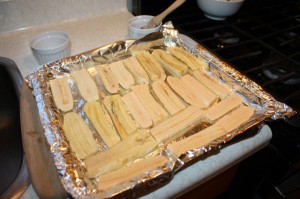 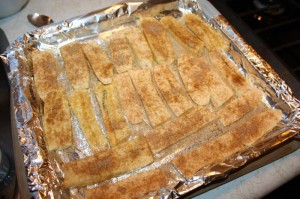 Place in the middle rack of a preheated 400 F oven and bake for 40-45 minutes. After 30 minutes check to see how it’s doing.. if you find that it’s golden and a nice caramel coat has formed, you may want to remove it from the oven early. I say this because I know that no 2 oven are the same when it comes to controlled temperatures. 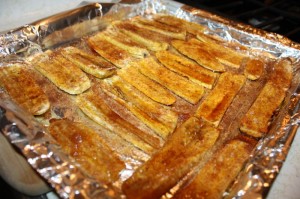 The lovely scent of cinnamon and nutmeg should be present in your kitchen and you’ll be tempted to eat a slice or two as soon as it comes out of the oven… be careful as it will be very hot.