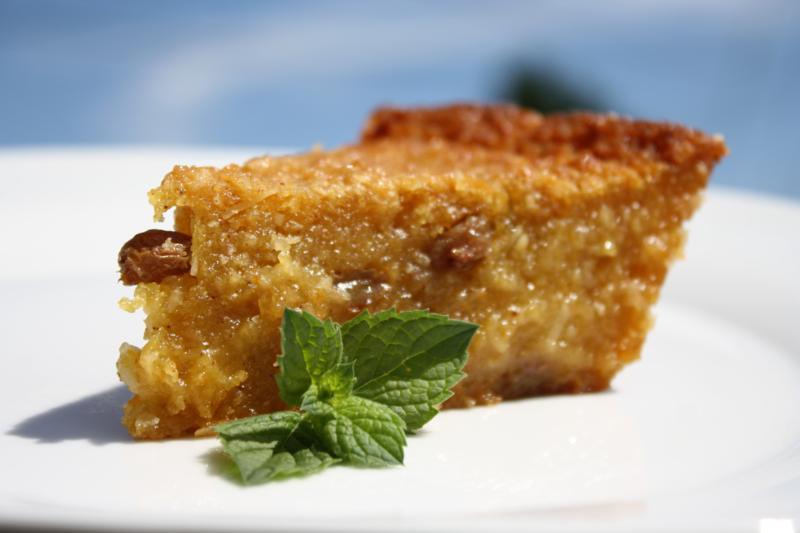 If I had a dollar for every time I’ve been asked for a cassava pone or “doubles” recipe, yuh boy would be rich. No Joke! Though I’m still to come up with a good doubles recipe, I’m very excited to share this tasty cassava pone recipe with you all. I’m sure “bake and shark” will replace the requests for cassava pone now that I’ve finally got around to getting this up.

As there are islands in the Caribbean, so too the many recipes for making pone as it’s lovingly referred to at times. In this recipe I’ve tried my best to cover all the basics to give you a mouth watering slice of cassava pone, but you can certainly personalize it as you get better at it. I do things a little different than my mom (who’s recipe I used as the base for this), and dare I say my version is better than hers?

Notes: Some work is required as far as the grating of the cassava and pumpkin, but you can also use a food processor or purchase the already grated cassava from your local (well stocked) grocery store and those of us in North America, can certainly use pumpkin pie filling. I know it’s not traditional, but sometimes convenience beats out on tradition. Same can be said for using canned coconut milk and not worrying about grating dried coconuts to get the milk out. 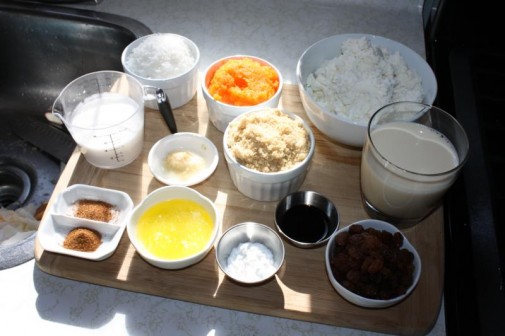 The first step is to peel, wash and grate the cassava and pumpkin. The skin on both the pumpkin and cassava will be a bit tough so you’ll need a sharp pairing knife or potato peeler. Now it’s just a matter of grating both items. It will take a bit of labor and do watch out for your fingers when the pieces get small as you grate away. At that point I usually use a piece of paper towel to hold onto the small pieces so I have a better grip. If you’re not in the Caribbean or somewhere tropical where cassava is grown, you may notice that it’s skin may be waxy. I believe the cassava is dipped in wax to help prolong it’s shelf life when it’s exported so don’t be alarmed. I’ve been told that you can find already peel cassava in the frozen section of the grocery store, which works well for this recipe. But I can’t confirm the results when used as I’ve never personally used frozen cassava. 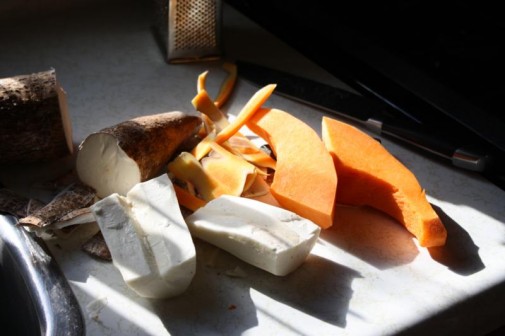 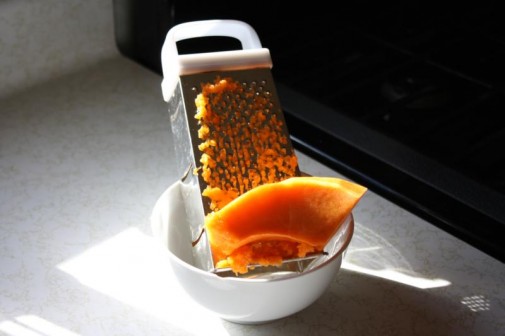 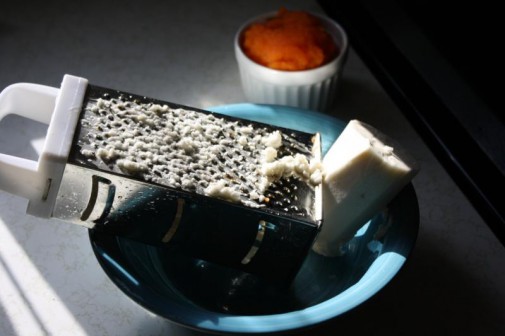 Now it’s just a matter of assembling everything into a thick batter. Start off with a large bowl (you’ll need a wooden spoon or whisk) and add in the coconut milk, sugar and spice. Give that a good whisk to break down the sugar. Then add everything else and mix well. In the mean-time preheat your oven to 350F. 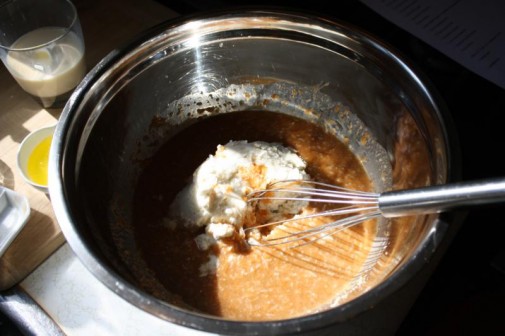 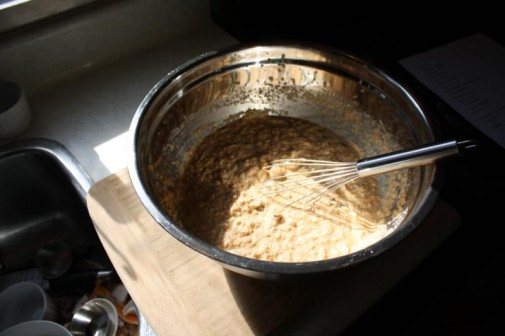 The next step is to grease a baking pan/dish (I used a ceramic pie dish).. you can use cooking spray or a light coat of butter as I did. Now pour in the batter into the baking dish and place on the middle rack of your now hot oven. 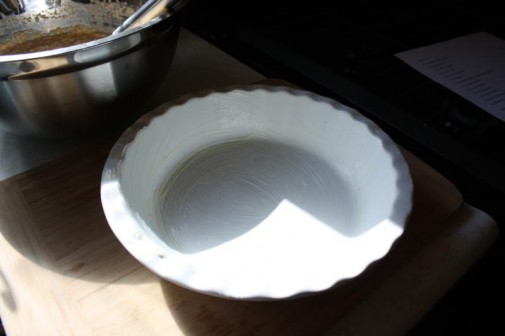 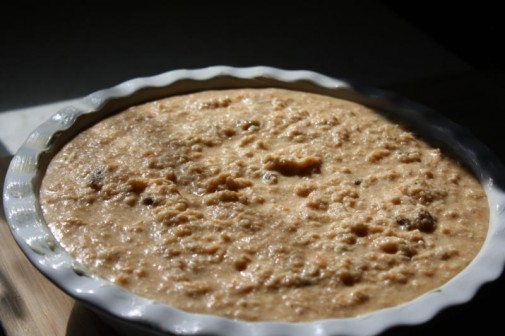 Since every oven differs when it comes to maintaining it’s heat and distribution, you’re aiming for 1 hour of baking. However if you find that the middle of the cassava pone is still wet or not as firm or golden brown as the edges, do allow it to bake for 10-20 minutes more. I ended up leaving mine for an extra 15 minutes if memory serves me right. I did the toothpick test.. stick a toothpick into the middle of the pone and if it comes out clean it means it’s fully cooked.

It’s very important (and you’ll need to ignore the temptation) that you allow the cassava pone to fully cool before slicing. 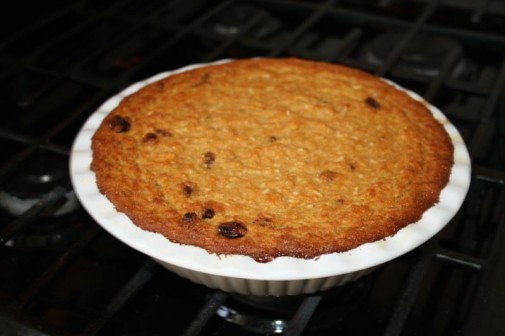 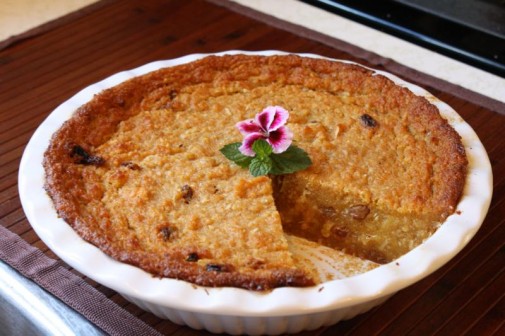 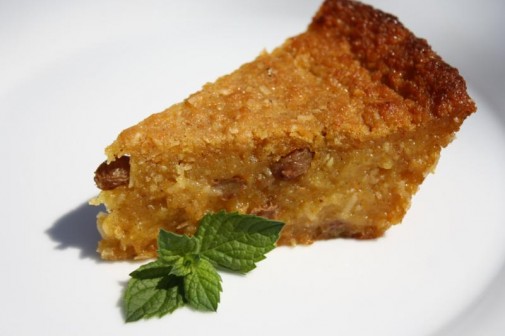 Your entire house will be blanketed with the lovely aroma of baking goodness and don’t be surprised if your loved ones keep asking “is it done yet?”. I purposely turned on the fan above our oven (vent) to pump the enticing scent throughout the neighborhood. You could hear neighbors mutter “what is he making now”,  area dogs were barking hysterically and people on their evening walk would pause as they walked by our house (with a quizzed expression on their faces). Yea.. the wicked chef is at work again!

There is a bit of work involved if you choose to grate your ingredients, but I assure it will be well worth the effort. If you’re not from the Caribbean and you do have friends from the region.. make one of these and surprise them. you’ll instantly get an island passport of choice (smile). 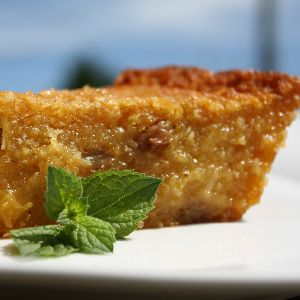