My first experience with “food tv” was many years ago when we had just 2 TV stations on the island (both showed the same programs) and there was a lady name Sylvia Hunt who had a wonderful cooking show showcasing many of the traditional and regional dishes we grew up on. To this day I have a lot of respect for Ms Hunt and the fact that she can be partially credited for my love for sharing our culinary culture and being a foodie in general.

Then when I  moved to Canada, I would sit in front of the TV on a Saturday and watch public television as that was the only channel that had cooking programs back then. Shows such as Two Fat Ladies, Julia Childs, Jacques Pépin, James Barber – The Urban Peasant, Wok With Yan and Pasquale’s Kitchen Express to name  a few. Now with all the specialty TV networks, we’ve got the Food Channel that’s creating celebrities out of everyday cooks and exposing people to foods they would never have known before. 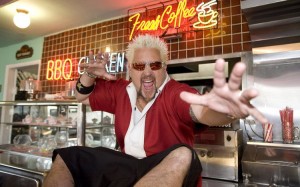 I recently caught an episode of Diners, Drive-ins, and Dives which is hosted by Guy Fieri and featured on the Food Network, that I just had to share with you all. It’s a great look at some traditional dishes being made and enjoyed in Seattle. It’s nice to see Pam of Pam’s Trinidadian Caribbean Kitchen spreading the culinary culture of the islands.

Here’s a direct link to Pam’s Trinidadian Caribbean Kitchen in the event you’d like learn more about her and  or you’d like to give her menu a test!