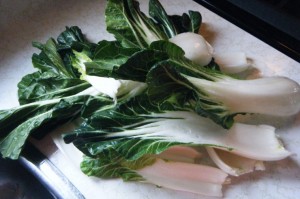 This recipe is in response to all the comments I got to the Swiss Chard recipe I posted a while back. It seems there were a lot of people who were getting confused with Swiss Chard and Pak Choi. I could easily see why, as not only do they both taste great when cooked and the preparation is basically the same, plus the appearance is very similar. Normally I cook pak choi when I have some left over stew pork as it adds a great flavour to the finished dish, but seeing the nice selection they had at the grocers our last visit. I just had to get some, even though I had no leftover pork.

To understand what I mean when I talk about the confusion caused by the Swiss Chard recipe, you must also check out that recipe and read the comments directly below it. CLICK HERE >  Swiss Chard Recipe. While there take a close look at the stems (white part) of the chard, now compare it to the white part of the pak choi (pics below). also note that the green part of the Swiss Chard has a bit more waxy look to it, very crinkled and can be very large. I’ll be sure to plant both pack choi and swiss chard this spring in my garden to get some better pics to show the subtle differences.

Start by separating the leaves of the pak choi and rinse thoroughly under running water to remove all the sand and dirt that can accumulate there. Pak Choi is usually planted in sandy soil,as as the leaves develop, sand and dirt can get trapped between the leaves. 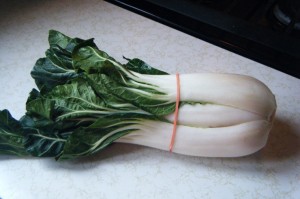 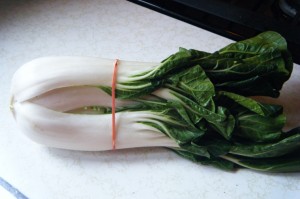 The next step is to cut the leaves and stems into smaller pieces (cubes and strips) to allow for fast and even cooking. You’ll notice that in the pak choi I got there’s a lot of stem (white part) and not as much green leafy part. In the Caribbean the leafy part is much bigger, but I have to use what I can find 🙂 What I usually do is cut the white part length-wise into 1/2 thick strips (see pic below). Then I roll the leafy part into a somewhat tight bundle and slice the entire thing. So I get the white parts cubed and the leafy part comes out is shreds. 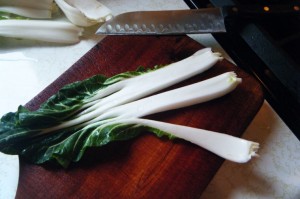 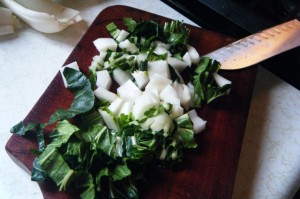 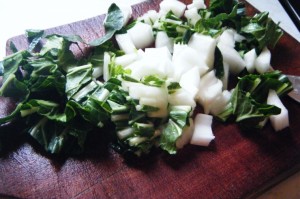 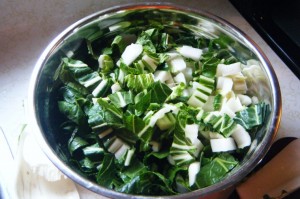 Lets get to cooking now.  Heat the oil in a fairly wide pan and add the onion, garlic and slices of pepper. Allow that to cook over medium heat until the onion is soft and the oil is infused with the garlic. Takes about 4-5 minuets. Now start adding the pak coi to the pot (you’ll think it won’t fit at first.. but it will cook down). Stir and keep adding. Then add the salt and black pepper. With the heat between med and low, cook covered for about 5 minutes. 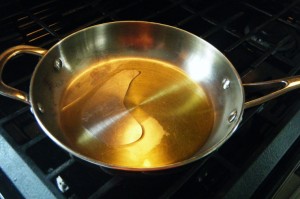 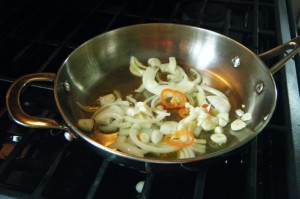 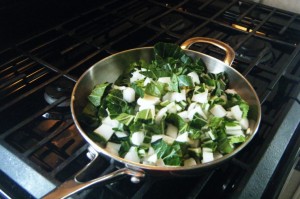 Now remove the lid and allow all that liquid that accumulated to cook off. I turn up the heat a bit and it takes about 5-10 minutes to cook off. Now depending on the texture you like ( soft or with a gently crunch) you may have to experiment with the final cooking time (after you’ve removed the lid). 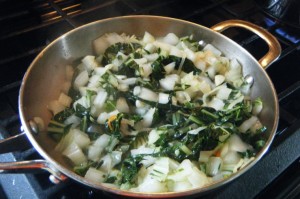 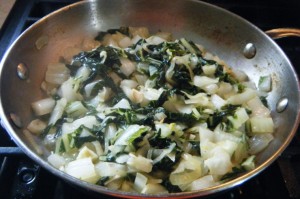 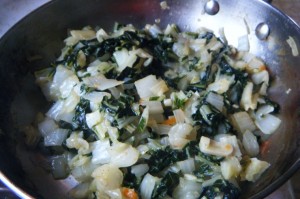 TIP!. As mentioned above for an extra level of flavour you can add left over pieces of stewed pork the last couple minutes of cooking. And another way to flavour this is by adding some pieces of salted cod when you’re cooking the onions at the start.

So can you tell the difference between Swiss Chard and Pak Choi now? They both taste very similar, except I find that the Swiss Chard has a bit of a more bitter taste and the Pak Choi seems to be a bit smoky.

I’d love to hear from you, so I encourage you to leave me your comments below. Maybe you have a different version of this recipe you’d like to share?