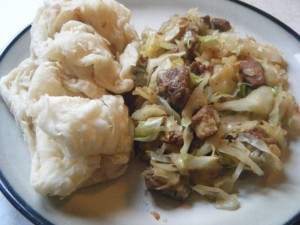 Looking back at the difficult time we (brother and sisters) gave my mom due to the food she would prepare for us, I was overcome with a terrible sense of guilt. There were times we would refuse to eat even though she was making the most of what’s available, as well as trying to make stuff for us that were healthy. Full circle? We go through the same thing with our daughters, but we have influences like McDonalds, Taco Bell, Burger King and the other fast food joints all over this city that my mom didn’t have to compete with.

Cabbage was of those things which I would refuse to eat when I was younger (there are a few I’ve already mentioned on this blog), unless it was in chow mein. But I find myself drawn to it the past few years. Here’s a dish that was passed down to me by my grandmother who recently celebrated her 94th birthday. Instead of using pork, she would use left over stew chicken or salted cod to flavour it, since I don’t think she’s ever had pork in her life.

Note: if you don’t eat pork , you can always use leftover stew beef or chicken and salted cod is also a very tasty alternative. You can also check out the recipe I posted before for cabbage with corned beef. If you’d like to have the recipe with the salted cod, leave me a comment and I’ll post it for you. Vegetarians, you can leave out meat completely from this dish and it’s still excellent. 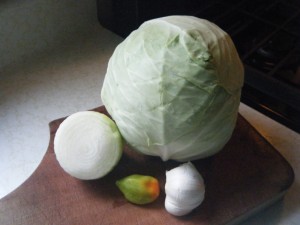 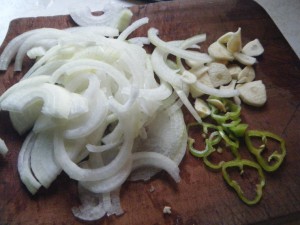 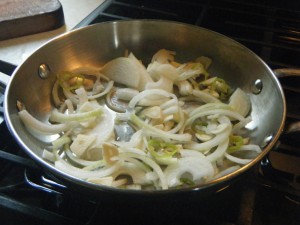 Allow the onions etc to cook for about 5 minutes on medium to low heat. The idea is to soften it to release it’s sugars and flavours. The next step is to add the shredded cabbage (I think it was about 5 cups or so) and stir gently. The pot will seem crowded and stirring will be a bit difficult, but it will reduce as it cooks. DON’T cover the pot or risk having a lot of liquid forming and making the dish soggy. 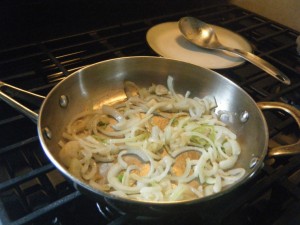 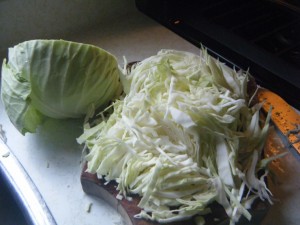 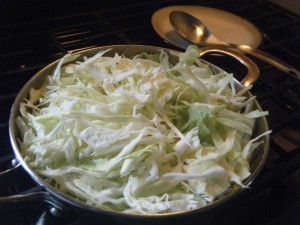 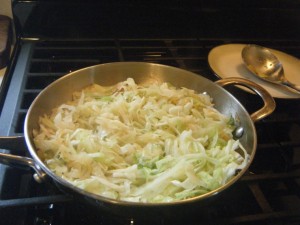 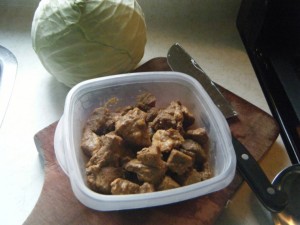 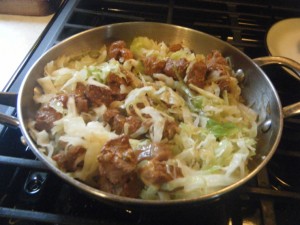 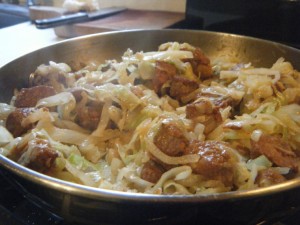 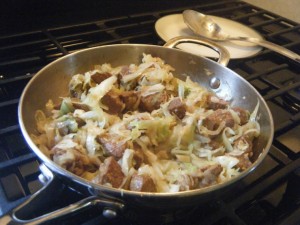 You won’t believe how tasty this cabbage dish is until you’ve tried it. I was fortunate to have some roti to eat this with, but it’s just as good with rice, ground provision, in a sandwich or as an everyday side dish.

TIP! Since I’ve confessed before that I can’t make roti, when my mom is in town we get her to make up a batch for us (buss up shut) and I freeze them in individual portions in zip lock freezer bags. Now don’t get me wrong, nothing beats fresh made roti, but when you reheat these it’s very close to the fresh stuff. So the next time you have someone over who can make roti, have them make you a batch and freeze them for times like this or go to your local Caribbean restaurant and get a batch to freeze. The only other tip I can give you is when heating in the microwave, don’t set the time for too long. Give it a 45 second blast, allow it to stop.. then hit it again for another 45 seconds. For some reason it it goes continuous, it ends up being a bit soggy. If you’re heating sada roti, I would recommend that you wrap it in paper towels or a tea cloth when reheating to avoid it going sorry.

Did you know that you can also freeze and reheat doubles? YUP! The closest joint that sells doubles in 1 hr away in Toronto. So when we drive down to visit my sister or go shopping we usually get several batches that we freeze.

FINAL TIP! When putting the roti or doubles into freezer bags to freeze, try your best to squeeze out any excess air from the bag as you seal it. If you have one of those “seal a meal” gadgets, take full advantage of it.

Leave me your comments below  and…