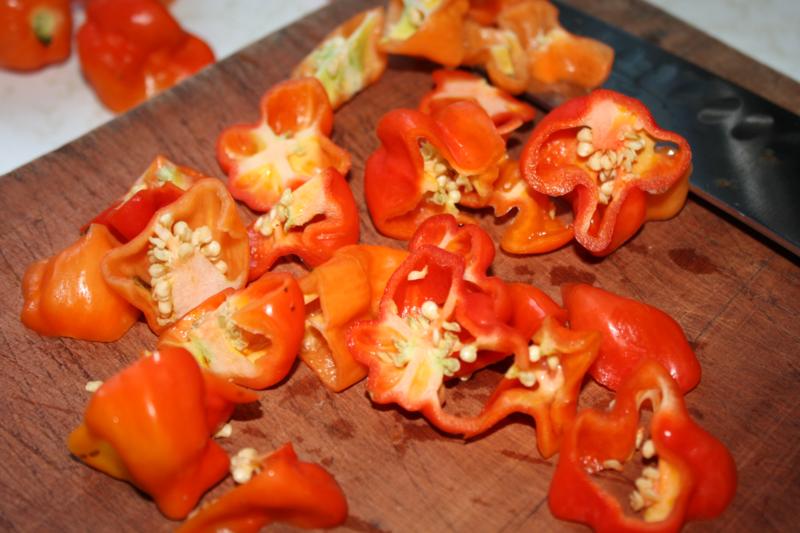 It’s been a sticky summer with just about everyday being extremely hot and humid, but I’m not complaining except for the havoc all this heat is doing to my habanero plants. If you’re connected to the Facebook Fan Group, you’d know that a few weeks back I was seeking advice on what to do with my plants. They were dropping their leaves and not holding on to the flowers or baby peppers. Good news is that I finally got some peppers, but the yield is about 70% lower than in previous years.  I’m hoping that the cool weather we get in mid to late August will see the second crop be better.

As we’ve discussed in previous hot sauce (pepper sauce) recipes, in the Caribbean just about everyone makes their own sauce and have some sort of secret family recipe or the other. But if we were to define our hot sauces, one word comes to mind – HOT! This sauce is not a traditional Caribbean pepper sauce, since we’ll be using canned peaches and the texture is a but more liquid than the ones we make down the islands. Traditional stuff is a bit more thick or chunky, with the use of carrots, papaya, chunks of ripe limes and other native ingredients.

* NOTE: If you’re using scotch bonnet or habanero peppers and you want the flavour without all the heat, discard the seeds and inner white membrane. This is where all the real heat is in peppers. Additionally, when cutting up the peppers be sure to use a disposable gloves or rub cooking oil over your hands to form a a protective shield from the oils from the peppers. And don’t forget to wash your hands thoroughly with soap after you’re done with this recipe. 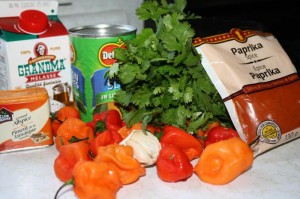 Remove the stems from the peppers and give them a rough chop so it’s easier to puree in your blender or food processor. Basically all you’re doing is adding all the ingredients to the blender as in my case and puree until you have a smooth consistency. 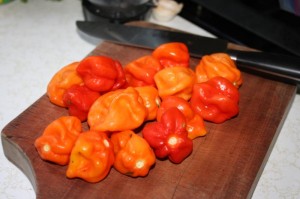 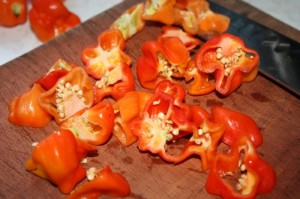 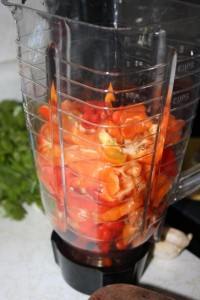 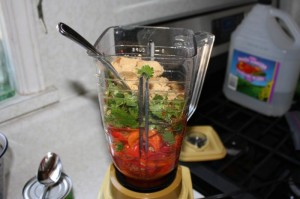 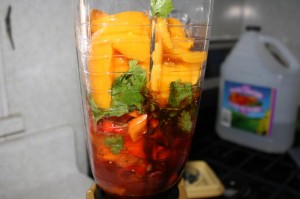 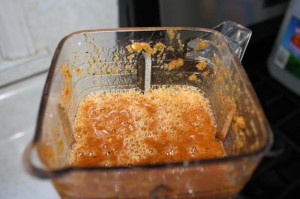 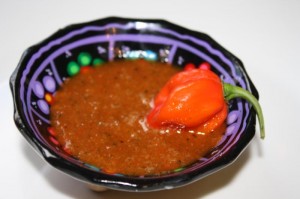 Don’t ask me why as I can’t explain, but if you allow the finished sauce to rest for about 1 day or so in the fridge, the flavour changes for the best, compared to if you started using it the very same time you’re done making it. However, I’m a hotsauce addict so I started using mine seconds after it came out of the blender. In true Caribbean style I saved my old bottles (pasta sauce etc) just for these occasions. After a good wash in boiling hot water and soap, I allowed them to dry and then I topped one with the hot sauce. Hey, I’m just doing my part to keep this earth we call home greener by reusing! 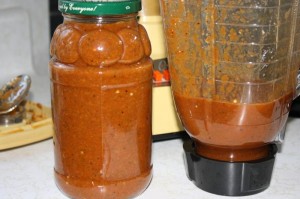 This sauce is very savory with a bold kick of heat as it makes it’s way around your tongue. As I mentioned above, it’s not a traditional Caribbean style hotsuace and it’s a bit runny. It makes a great topping for grilled meats, hamburgers, hot dogs and on sandwiches. I would bet my last dollar that it would also make a great dipping sauce for wings. Directly below you’ll find links to other hot sauce (pepper sauce as it’s know on the islands) recipes that I’ve done in the past.

I’d love to get your feedback or just say “hi” in the comments box below – it’s appreciated. And before I go I’d like to remind you to check out the latest cooking videos, pictures and if you’ve not already done so, join our select group on Facebook. Where we discuss all things related to the Caribbean Cooking Culture.