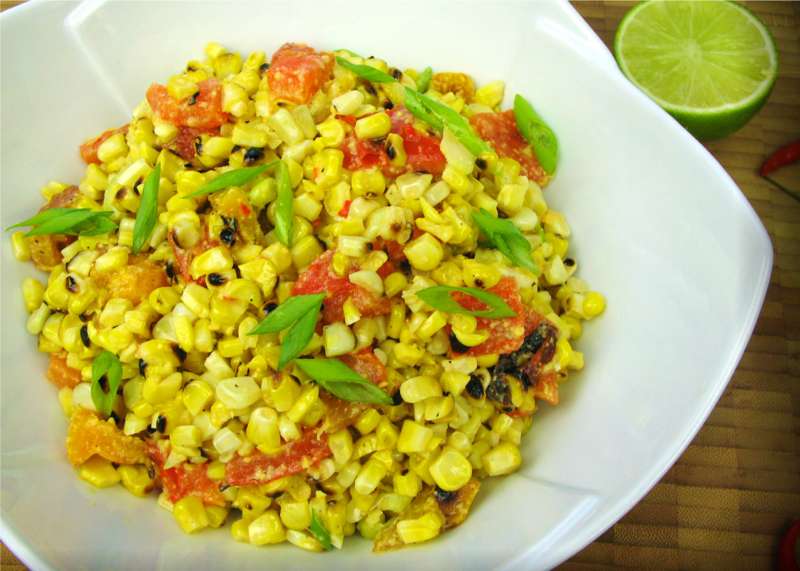 No joke.. I disliked roast (grilled) corn as a boy on the islands and even today it’s not something I  automatically prepare when sweet corn is in season here in Ontario. I absolutely hate the kernels getting stuck between my teeth!  However, you can feed me boiled corn (naked.. no butter or salt) everyday and I’ll be happy. The joy of those sweet kernels popping as you bite down on the cob takes me back to days when my brother and I would countdown the days to harvest. Back then it was common for people (who lived in the country-side) to have a plot of land where they planted a lot of the vegetables they ate. We always had corn, pigeon peas, cassava, scotch bonnet peppers, eggplant, okra, pumpkin, eddoes.. well you see where I’m going with this list.

Though it wasn’t the tender sweet corn as you get in North America, we always got to the corns before they got overly mature so we could have sweet and tender corn on the cob when boiled.

Brush the corn with olive oil or any oil you like using and place then on a hot grill (I did mine on charcoal). There’s no need to brush the bell peppers with any oil as we want them to char to the point where the outer skin will be easy to remove. By grilling both the corn and peppers they will become even more sweet and take on a lovely overall flavor. Remember to rotate them as they grill and be prepared to hear the corn popping as they cook. 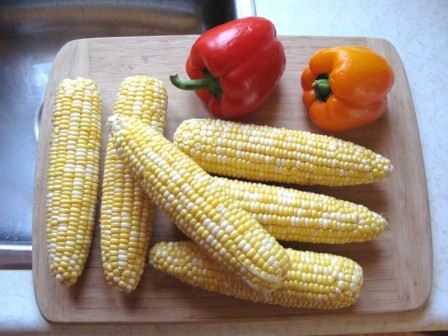 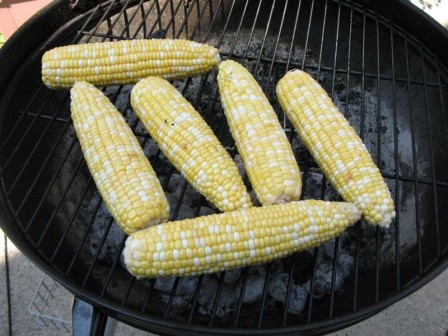 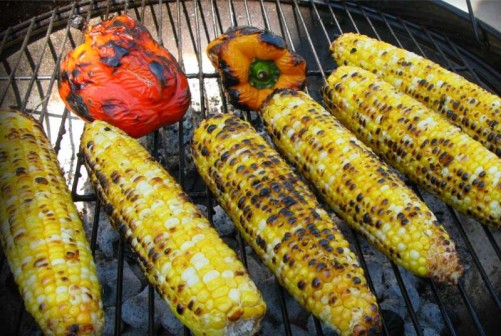 As they grill, lets prepare the zesty cheddar dressing. You’ll need a blender or a magic bullet as I did. Grate the cheese and finely chop the scotch bonnet pepper before adding to the blender. Remember to wear gloves when handling such peppers and do remember to wash your hands with soap and water immediately after handling. Place all the ingredients into the blender and puree to a somewhat smooth and creamy consistency. 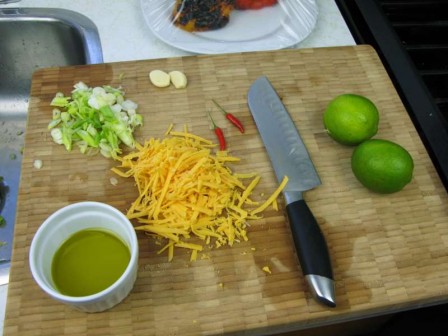 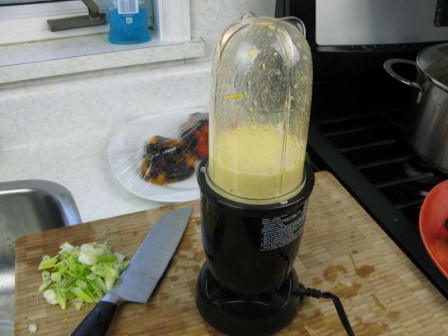 Immediately after you remove the peppers off the grill, I would recommend placing them on a dish and wrapping the dish in plastic wrap. The residual heat will cause them to steam and make removing the charred skin easy to remove. 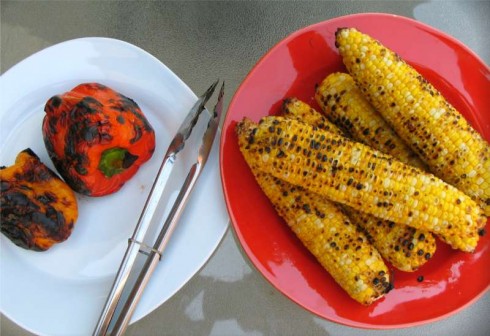 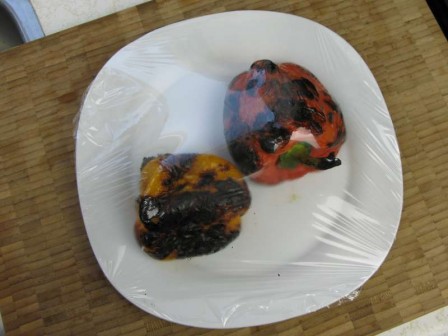 TIP! To prevent the corn kernels from scattering on your counter when you remove them off the cob, I like placing an inverted (small) bowl inside a larger bowl. So I can stand the corn up on the small bowl and as I cut the kernels off, they will fall into the large bowl. 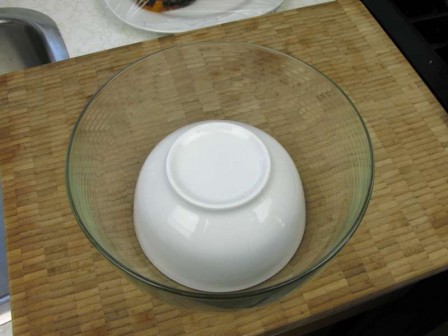 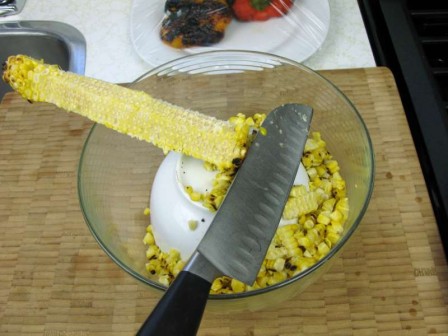 Time to prep the peppers… using your hands, a knife or paper towels, gently scrape the charred skin off the peppers. Then cut open, remove the stems and seeds (discard). Now cut into 1/4 inch pieces and add to the bowl with the corn. Chop the scallions and also add them to the bowl. 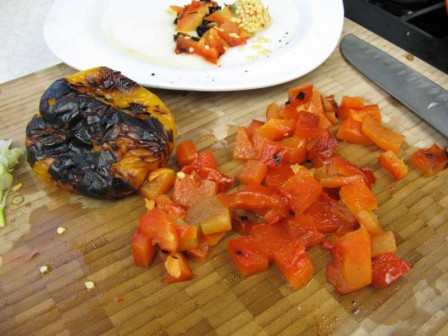 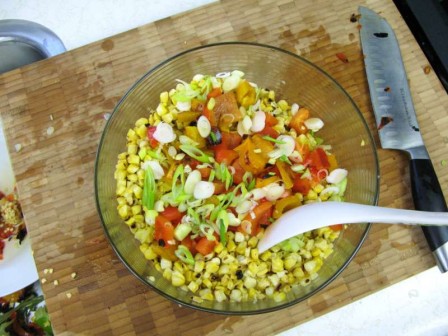 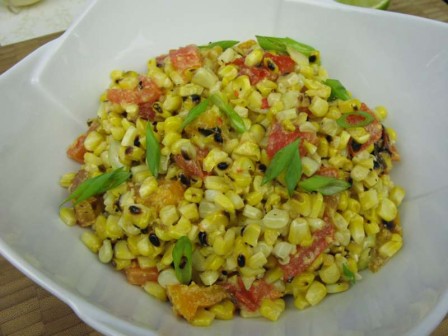 Top with the dressing (remember to stir the dressing if  its been sitting around for long) and give everything a good toss. Serve immediately (love it warm) or store in the fridge. Remember there’s cheese in the dressing, so be sure to keep it out of the sun (if serving outdoors). 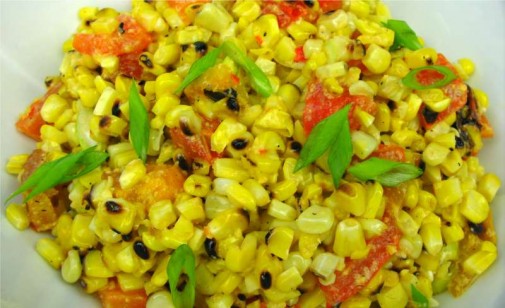 If you have a weakness for roast corn and cheese like our dad you’ll love this dish and it’s the only way I would now eat roast (grilled) corn. As we progress through July’s month of grilling, be prepared for even more exciting dishes straight off the grill! 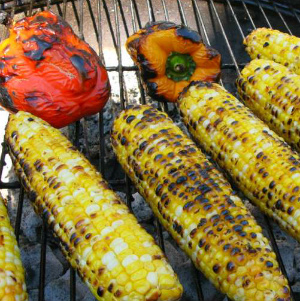