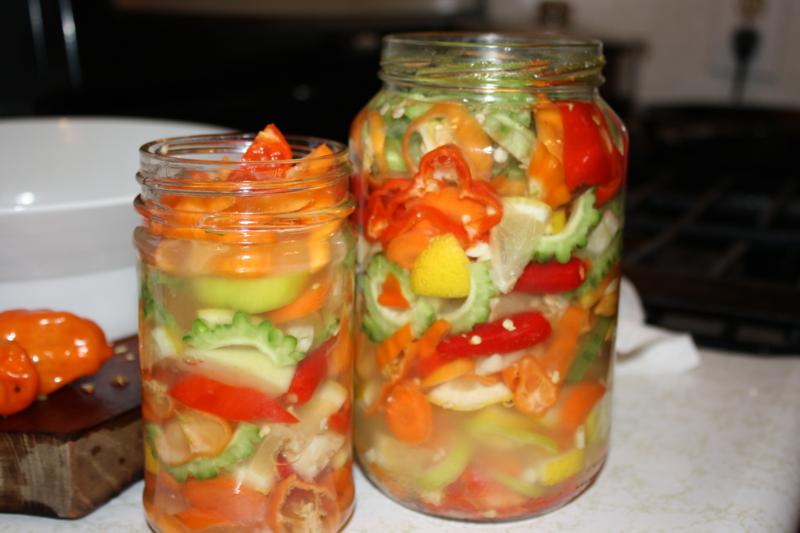 I grew up calling this cut-up pepper sauce, but I guess a better description for it would be pickled peppers since it resembles many of the pickled items I’ve seen in the grocery stores in North America. My mom would make this one exclusively with lime juice (no vinegar) and she would allow it to sit in the open sun for about a week or so before anyone was allowed anywhere near it. Supposedly the combination of the acid in the lime juice and the brilliant rays of the Caribbean sun gave it an extra kick and slightly cooked everything into the perfect pepper sauce. That also allowed the lime juice to become a bit thicker and the pieces of lime would become tender and absorb the heat of the peppers…. wicked stuff!

This is a modified version of that original recipe which I grew up enjoying, but it’s just as tasty and packs a real punch. 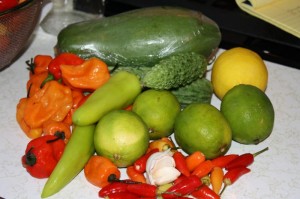 * If you don’t chili or Cubanelle peppers, you can use just about any other hot pepper you can source. For me it’s what I had in the garden at the time of making!

There’s no cooking involved with this recipe and it’s just a matter of slicing, dicing and assembling everything is a storage container (glass jar). So let’s get started…

Rinse the peppers under cool water and allow to drain/dry. Then peel the green papaya, remove the seeds on the inside and cube. Do the same for the caraili, but slice thin instead of cubing. (in the picture below you’ll see a lot of peppers, this was after I went through my garden and not all were used in the recipe) 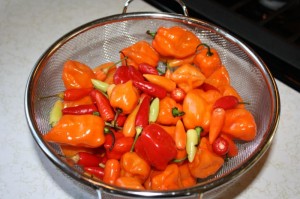 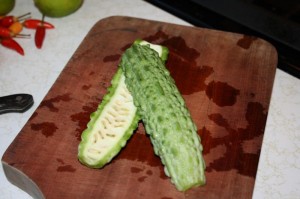 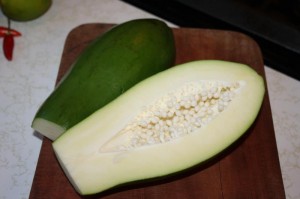 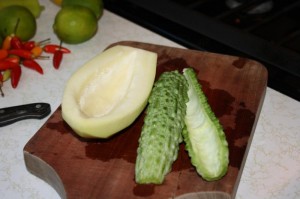 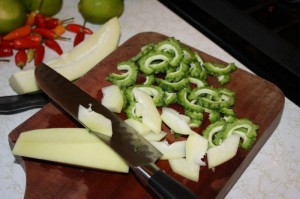 The next step is to cube the lemon, slice the Cubanelle and the habanero peppers (remember to remove the stems). It’s very important that you use gloves when handling the hot peppers, or risk having you hands feel as if they’re on fire… not to mention if you mistakenly touch your eyes (or something else lol). Also peel and crush the garlic and slice any big chunks. 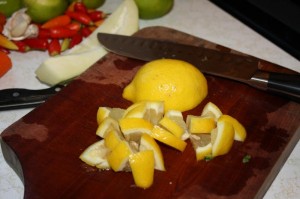 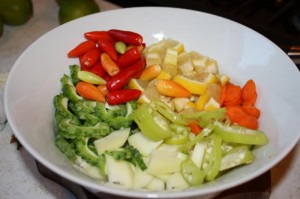 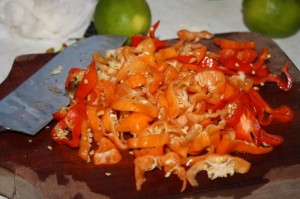 The final step is to mix everything in a large bowl, then add to a jar (with a lid) and pack down using a spoon. When the jar is full, top with the salt and squeeze the lime juice directly into the jar so it catches the salt on it’s way down into the bottle. Now top off with vinegar (you will not need all 2 cups, but it’s good to have that much just in case), close tightly and give it a good shake to make sure the salt is evenly distributed and the lime juice mixes with the vinegar. Allow this to cure for a couple weeks (if possible) before using… but there’s nothing stopping you using this immediately if you wish.

So the tips again…

– leave the seeds on the hot peppers for more heat

– use rubber gloves when handling the peppers

– allow to marinate for a couple weeks for best results.

With the use of vinegar this can last very long, even when not placed in the refrigerator. If you do decide to store in the fridge, remember that it will loose some of it’s heat (don’t know so I can explain why). WARNING! If you happen to notice the top going a bit frothy, spoon out that part and place the jar in the fridge. 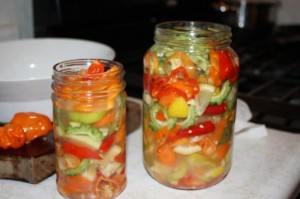 Please leave me your comments below, even if it’s just to say hello – it’s appreciated. And don’t forget to join us on Facebook where we share even more tips, cooking ideas and overall good foodie fun. Simply click on the image below to get started.