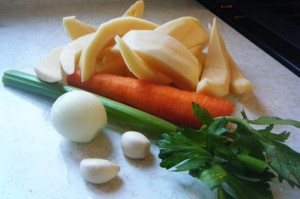 Though I’m a SOLID food kinda guy, I’m starting to really appreciate soups. As we’ve discussed in previous posts, the traditional soups in the Caribbean are very heavy, thick and full of carbs. Our soups are what would be seen as being “stews” in North America and is meant to be a true meal in one pot. But lately I’ve been experimenting with lighter (belly wash as my dad call them) soups, where the ingredient list is not overly complex.Simple and made from a few ingredients so you can really appreciate the main ingredient.

I first had this soup a few years ago while in Trinidad, but I can’t remember the name of the restaurant where we had lunch (some where in Port Of Spain)… I probably had some “beverages” that same day so the memory isn’t all that clear. After a few tries I came up with a recipe that’s as close to the real thing as far as I can remember.

IMPORTANT NOTE: I tried my best to get the sort of pumpkin we get in the Caribbean, but the Asian stall at the farmers market didn’t have any. I then tried a couple Caribbean food stores without any luck so I ended up using a sort of squash-like version. Though they probably belong to the same family, it’s really not the same as the real thing. Yes, squash will work, but the flavour and consistency does differ a bit. BTW, here’s a pic of sliced pumpkins at the San Fernando Market (Trinidad) that I took back in October 2009. You can view a lot more pics I took that day on the picture feed for the site (go a couple pages deep) 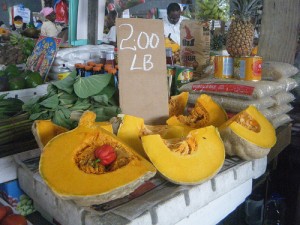 Start by putting the butter to melt on medium heat in a deep pot (on high heat the butter will burn very quickly). Then add the onions, carrots, garlic and celery to the pot. Allow this to cook until the onion is tender (about 3-5 minutes). Then add a dash of black pepper, the curry powder and turmeric… allow to cook for about 3 minutes. Quite honestly the aroma that comes out of this is probably the BEST I’ve smelled in quite some time. 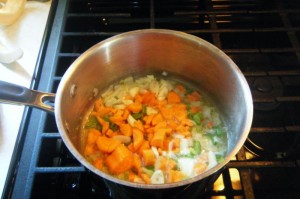 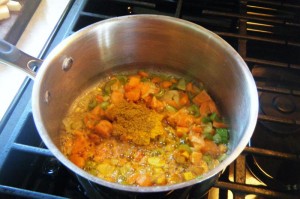 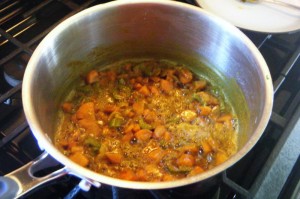 Now we’ll add the cubed pieces of pumpkin and stir around. Then add enough water to cover the pumpkin, bring to a boil, then back down to a simmer (I used about 3 1/2 cups of water). Add the salt, cover and let cook on low heat for about 30 minutes or until the pumpkin is tender. If you find that it’s going thick, add a bit more water and/or turn down the heat a bit. 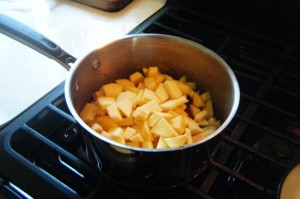 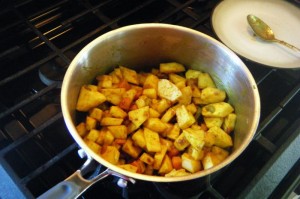 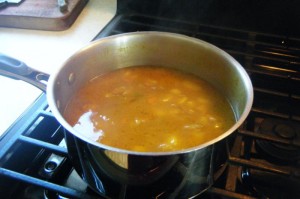 The final step is to add the cream and blend or puree the entire thing into a smooth soup. I used one of those immersion blenders to get the smooth consistency I was looking for. A couple tips if you’re using one… 1. Try to pulse to avoid the soup going frothy. 2. Rinse the blender off with water first before putting it into the soup. The turmeric can stain the blender, if yours is as white as mine. Yea, we got the cheaper plastic version and not the stainless steel one. You can also use a whisk or pour the entire thing into a regular blender or food processor if you wish. Bear in mind that you’re working with a hot liquid. 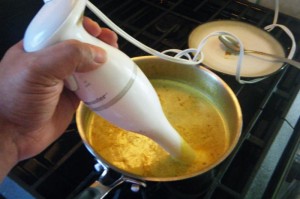 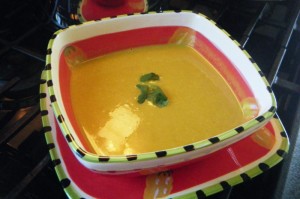 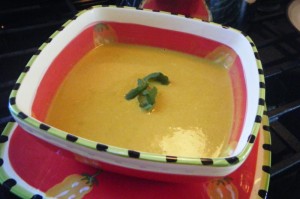 Next time I’ll be sure to get some of the authentic Caribbean type pumpkin to really test the difference in the final taste as compared to using the squash. I’ll also be testing using a combination of cream and coconut cream as I’m sure it will work well with the curry in this dish.

BTW, if you can’t get cream, I’m sure evaporated milk will work just as well.